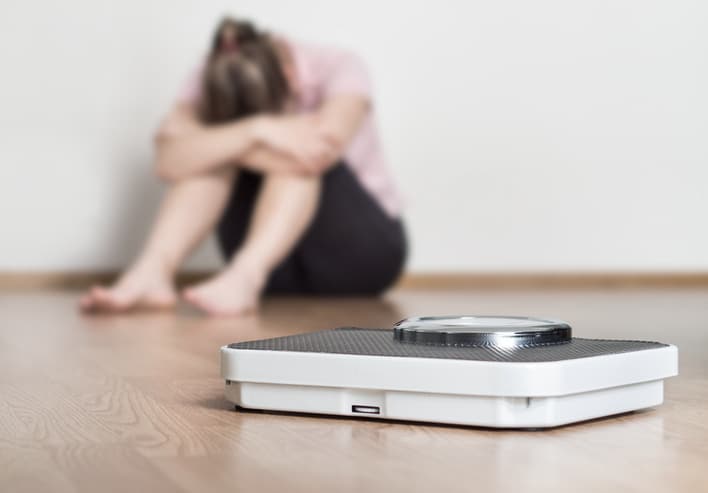 A common misconception about eating disorders is that they are a lifestyle choice. Nothing could be farther from the truth. Eating disorders can be deadly and are seen as a common morbidity in adolescent and young adult females. Too often, diagnosis in men goes overlooked and treatment may be neglected.

Emotions, health, and the ability to function in life are all negatively impacted by eating disorders. Unhealthy eating habits tend to develop, which are caused by a range of psychological conditions that stem from obsessions with food, body weight and or body image disturbances. It is estimated that 20 million women and 10 million men in the United States Of America will have or have had an eating disorder at some point in their life. Sexual abuse plays a large role in eating disorders with 30% of patients having had a positive history.

Anorexia: Fear of losing self control

Anorexia has a slightly higher morbidity than any eating disorder. Onset of anorexia in teenage girls is seen at age 15; 80-90% of patients with anorexia are female. Roughly 25% of men are diagnosed with anorexia nervosa.

A person with an eating disorder may believe “If you can control what you eat, you can control your life.” It’s a struggle between physical body image and mental health distortions. Persons who fall victim to anorexia may be in life situations where they feel they have no control, are trapped and under pressure to succeed. They become fixated and gain control over the amount of food that they take into their bodies which buys them control over their bodies.

Common signs of anorexia include:

Common issues to consider for men with anorexia

Men who are diagnosed with anorexia, may have been mildly to moderately obese at one point in their lives. Sexual abuse may have gone unreported due to shame and stigmatization. Sexual orientation is another factor to consider since most men who have body image issues are straight. Although, symptoms of eating disorders are said to increase by 10% in gay men.

Laboratory findings in both men and women

Bulimia nervosa: The urge to eat

Bulimia nervosa typically shows signs in adolescence or early adulthood. It is described as objectively eating large amounts of food (binging) with a loss of self-control and compensatory behavior which involve self-induced vomiting (purging). “I can’t stop,” describes one patients account of the binge and purge cycle.

The causal factors underpinning eating disorders have been clarified by understanding about the central control of appetite. Cultural, social, and interpersonal elements can trigger onset, and changes in neural networks can sustain the illness. Overall, apart from studies reporting pharmacological treatments for binge eating disorder, advances in treatment for adults have been scarce, other than interest in new forms of treatment delivery.

Binging and vomiting occur in 80-90% of people with bulimia. Binge-eating and purging behaviors can lead to a range of medical complications, such as electrolyte imbalance, which can lead to arrhythmia or death, esophageal tears, gastric disruption, problems with fertility, and dental decay. People suffering from BN typically have a normal weight or are slightly overweight. They are extremely critical of themselves and have a depressed mood. Adolescents suffering from BN often have a high risk for suicidal behavior.

Common signs of bulimia nervosa include:

May show fluid and electrolyte imbalances which include hypokalemia, hypochloremia, and metabolic acidosis.

Men may go under diagnosed since they may feel that they do not have a problem and they feel fine. They also may have a misconception that eating disorders contribute to other health issues. This denial behavior is common in men with bulimia.

Binge eating disorder is the most common disorder affecting 3% of American adults. Typically, people experience a lack of control and consume large amounts of food than the average person would. It emerges in adolescence and early adulthood and can continue on in midlife. In the beginning, a person can eat a little more or little less food than usual. The urge to eat more becomes compelling until it consumes the persons whole life.

The following are common warning signs of a binge eater:

Obesity, weight stigma and weight stigma are all serious concerns that can arise from BED. These can lead to more serious health concerns and comorbidities such as diabetes, heart disease, and several others. Although, most people will present at a normal weight.

Pica: The eating of non-nutritive foods

Pica is described as the persistent eating of non-nutritive non-food substances for a period of at least one month. The term ‘pica’ comes from the Latin word meaning magpie bird, because of the bird’s tendency to gather various objects for consumption out of sheer curiosity. Most commonly seen in children, pica can also be a disorder seen in mentally impaired adults. In women it is seen during pregnancy.

People suffering from pica have a tendency to eat earth, raw starches, ice, charcoal, ash, paper, chalk, cloth, baby powder, coffee grounds, and eggshells. It can be an isolated disorder but at times can also manifest with schizophrenia, trichotillomania, and OCD.

Risk factors related to pica include:

Exams can be normal but healthcare professionals need to be on the alert for signs of poisoning. Certain objects that are ingested can cause toxicity as well as complications that can lead to obstruction and bezoar formation, along with ulceration and perforation. Lead poisoning can also occur which can further cause seizures, headaches, lethargy, and cranial nerve palsy.

Iron studies, lead levels, and zinc studies should be considered in all people suspected of having Pica. Metabolic studies are especially important when a person has been ingesting clay since it can cause metabolic disturbances and hypokalemia. Plain abdominal x-rays, barium studies, and endoscopy. In many cases, serial studies are needed to ensure that the substance has passed.

Pica is not a life-threatening disease and is categorized as being benign. In pregnant women and in children, the disease can spontaneously resolve. It some people suffering from pica, it can persist for years. If a person is having symptoms of pica, close attention should be placed, as to avoid further complications due to possible bowel obstruction and ulcers that can happen.

Rumination disorder (RD) is the repeated regurgitation of food after chewing and swallowing without the use of medication ingestion. Spitting out of the regurgitated material can also be placed in this category. Due to being under reported, RD is difficult to diagnose and treat. RD does not occur in conjunction to anorexia, bulimia, binge eating or avoidant restrictive disorders.

A physical cause for RD must be ruled out. Treatment includes diaphragmatic breathing exercises and habit reversal. The person experiencing RD is taught the signs and situations along with how to reverse them. Deep breathing techniques replace the rumination habit.

Avoidant and restrictive food disorder (ARFD) was first introduced in 2013. It’s a complex eating disorder that stems from genetic, psychological and social ramifications that affects mostly children and adolescents. It is further categorized as a persistent failure to meet appropriate nutritional and energy needs. Typical patients with ARFD present as having significant weight loss or nutritional deficiency, dependence on enteral feeding or nutritional supplements, and or a marked interference in psychosocial functioning.

The major signs presenting in ARFD patients are:

The focus of treatment is on weight gain and family-based therapy. Family-based therapy focuses on lifting blame, raising the family’s anxiety about the dangers of low weight and malnutrition in young people, and empowering parents to take charge of nutrition and to focus on the goal of weight gain. Cognitive behavioral therapy may lift anxiety as well.

Almost anyone can suffer from an eating disorder. Eating disorders occur more frequently in affluent countries. Although, it does not mean that all people suffering from this disease process are well-off financially. Pressures from mainstream media and social media contribute to current-day body image issues in both males and females.

Special attention needs to be placed by healthcare professionals on the psychosocial aspects of eating disorders, specifically on repeated behaviors that cause cyclic incidences. Clinicians should put focus on empowering their patients who are suffering from eating disorders, which will increase their self-esteem. Accepting yourself for who you truly are is true recovery.

Ersilia Pompilio RN, MSN, PNP is a Pediatric Nurse Practitioner, and CEO of Rogue Nurse Media 501c3. She hosts and produces Nurses and Hypochondriacs Podcasts where she brings together Nurse Experts, Storytellers, Comedians, Actors and Activists to talk about hot topics in health care. She's a freelance writer/ blogger and teaches writing to healthcare professionals.