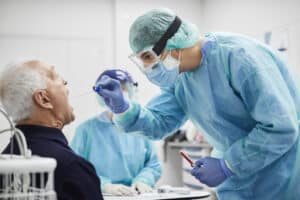 More than 87 million cases of coronavirus (COVID-19) have been diagnosed worldwide as of Thursday, January 7, including at least 1.87 million deaths. Healthcare officials in the United States have reported more than 21 million positive COVID-19 cases and at least 356,000 deaths. Source: Johns Hopkins University & Medicine

A new variant strain of COVID-19 is now present in at least 5 states across the country (and 33 countries) worldwide, as of the beginning of this week. According to officials with the U.S. Centers for Disease & Prevention (CDC), the “B.1.1.7.” strain contains a series of mutations that allow the virus to potentially be transmitted more quickly, though not necessarily more infectious. A better understanding is needed to know how easily B.1.1.7. might be transmitted and whether currently authorized vaccines will protect people against it. At this time, there is no evidence that this variant causes more severe illness or increased risk of death, according to the CDC.

The variant has a mutation in the receptor-binding domain of the spike protein where amino acid asparagine has been replaced with tyrosine, according to the CDC. The virus would likely need to accumulate multiple mutations in the spike protein to evade immunity induced by vaccines or by natural infection.

In November, CDC officially launched a Strain Surveillance program to increase the number and representativeness of viruses undergoing characterization. When fully implemented, each state will send the CDC at least 10 samples biweekly for sequencing and further characterization. In addition, CDC’s COVID-19 response is actively seeking samples of interest, such as samples associated with animal infection and, in the future, samples from vaccine-breakthrough infections. Data from these efforts are continuously analyzed and genomic data are rapidly uploaded to public databases for use by researchers, public health agencies, and industry.

According to a recent report by the Washing Post,1 Los Angeles County has become so overwhelmed by COVID-19 that oxygen supplies are being exhausted. Ambulance crews have reportedly been instructed to use oxygen only for their worst-case patients (those with oxygen saturation levels below 90 percent) and to not bring patients to the hospital if they have little chance of survival; to treat and declare deaths on the scene to preserve hospital capacity. Several Los Angeles hospitals have reportedly turned away ambulance traffic in recent days due to an inability to provide needed airflow.

To help ease the backup at hospitals, county officials have also issued an initiative to place tents outside to create temporary “ambulance receiving spaces.” Gov. Gavin Newsom has announced a statewide plan and a team of officials focused on bolstering California’s oxygen supply, and the Army Corps of Engineers has been called to send crews to update oxygen-delivery infrastructure at several hospitals. State emergency teams have also been deployed to refill oxygen tanks at more than medical support units across the state, and state officials are leasing mobile oxygen systems to bolster supplies and are looking to order several hundred oxygen concentrator unit, according to the report.

Hospitals in Southern California are reportedly running low on ICU beds, ventilators, and morgue space. The report also claims there are also shortages of portable oxygen tanks in ambulances and at-home tanks. The state reported a new single-day record for hospitalizations (22,405) on Jan. 5. Arizona, however, now has the nation’s highest rate of coronavirus hospitalizations.

Many people in the United States are missing the opportunity to stay safer from COVID-19 infection by not downloading mobile apps that can alert them to those infected. According to a report by the Washington Post,2 more than 150 million Americans could receive pop-up notifications from their local health authorities that would warn them if they have spent time near somebody who has tested positive for the virus, but they have not yet activated the free apps and registered themselves on their phones.
The report also cites early evidence that using smartphone technology helps to slow the spread. The apps use Bluetooth signaling when the phone of someone who has tested positive and is also registered through the app comes into close contact with someone else who also has the app downloaded and is registered.
Currently, the following states offer these types of apps: Alabama, California, Colorado, Connecticut, Delaware, Hawaii, Maryland, Michigan, Minnesota, Nevada, New Jersey, New York, North Carolina, North Dakota, Pennsylvania, Virginia, Washington, Washington D.C., Wisconsin, and Wyoming.
Arizona, Massachusetts, and Oregon reportedly have apps in development.

Officials at INOVIO, a biotechnology company based in Plymouth Meeting, PA, and Advaccine Biopharmaceuticals Suzhou Co., an emerging China-based biotech company, have announced the companies have entered into a collaboration and license agreement for a COVID-19 DNA vaccine candidate.
Under the collaboration and license agreement, Advaccine will have the exclusive right to develop, manufacture, and commercialize the vaccine within Greater China and will license its plasmid manufacturing process for use with the vaccine and other INOVIO pipeline product candidates to INOVIO. Additionally, Advaccine will provide its clinical data to INOVIO in support of INOVIO’s global regulatory filings while INOVIO will provide clinical data for Advaccine to incorporate into its marketing applications in Greater China.

“INOVIO’s partnership with Advaccine enables us to leverage their deep expertise, capabilities, and network across the region – making it possible to rapidly produce and if and when approved, distribute our vaccine candidate to more people across Greater China,” said Dr. J. Joseph Kim, president and chief executive officer of INOVIO, in a prepared statement. “This agreement also provides INOVIO with an Asian manufacturing partner with a near-term focus on [the vaccine] and a long-term manufacturing resource potentially for other INOVIO products. We are grateful for Advaccine joining our global manufacturing coalition as a dedicated resource for Greater China and look forward to our continued partnership in the fight against COVID-19.”