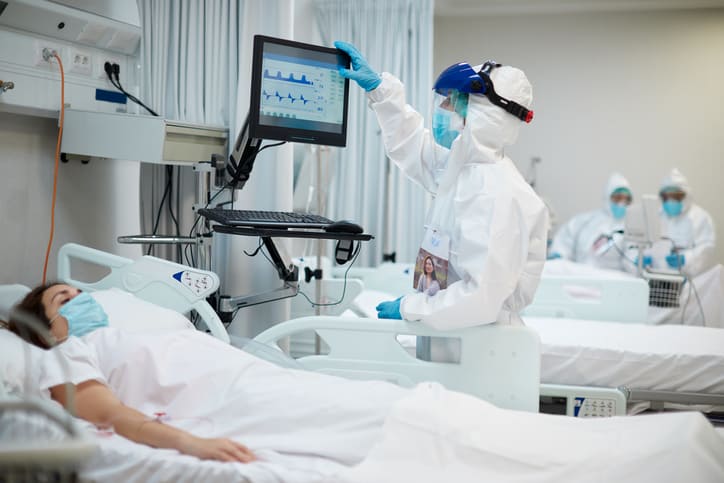 At least 235.8 million cases of coronavirus (COVID-19) have been diagnosed worldwide as of Monday, October 4, 2021, including at least 4.8 million deaths. Healthcare officials in the United States have reported more than 44.5 million positive COVID-19 cases and approximately 719,000 deaths. Source: www.worldometers.info/coronavirus

At least 6.33 billion individual doses of COVID-19 vaccine have been administered worldwide as of Monday evening, including at least 396 million in the United States. Source: GitHub

An investigational oral antiviral drug by Merck and Ridgeback Biotherapeutics was found to significantly reduce the risk of hospitalization or death in patients with mild or moderate COVID-19.

The medication, molnupiravir, was trialed through a Phase 3 trial in at-risk, non-hospitalized adult patients. In the interim analysis, molnupiravir reduced the risk of hospitalization or death by approximately 50%, according to a statement released Oct. 1 by Merck officials.

At the recommendation of an independent Data Monitoring Committee and in consultation with the U.S. Food and Drug Administration (FDA), recruitment into the study is being stopped early due to these positive results. This is standard research practice for studies that achieve a critical mass of data before the allotted test time is reached, as it would be considered unethical to continue the study with such overwhelming results.

Merck officials plan to submit an application for emergency use authorization (EUA) to the FDA as soon as possible based on these findings and plans to submit marketing applications to other regulatory bodies worldwide.

“More tools and treatments are urgently needed to fight the COVID-19 pandemic, which has become a leading cause of death and continues to profoundly affect patients, families, and societies and strain healthcare systems all around the world,” said Robert M. Davis, chief executive officer and president a Merck. “With these compelling results, we are optimistic that molnupiravir can become an important medicine as part of the global effort to fight the pandemic and will add to Merck’s unique legacy of bringing forward breakthroughs in infectious diseases when they are needed most. Consistent with Merck’s unwavering commitment to save and improve lives, we will continue to work with regulatory agencies on our applications and do everything we can to bring molnupiravir to patients as quickly as possible.”

The planned interim analysis evaluated data from 775 patients who were initially enrolled in the Phase 3 trial on or prior to Aug. 5, 2021. At the time of the decision to stop recruitment based on the compelling interim efficacy results, the trial was approaching full recruitment of the sample size of 1,550 patients, with more than 90% of the intended sample size already enrolled.

Eligibility criteria required that all patients had laboratory-confirmed mild-to-moderate COVID-19, with symptom onset within five days of study randomization. All patients were required to have at least one risk factor associated with poor disease outcome at study entry.

Molnupiravir reduced the risk of hospitalization and/or death across all key subgroups; efficacy was not affected by timing of symptom onset or underlying risk factor. Additionally, based on the participants with available viral sequencing data (approximately 40%), molnupiravir demonstrated consistent efficacy across viral variants Gamma, Delta, and Mu.

The most common risk factors for poor disease outcome included obesity, older age (older than 60 years), diabetes, and heart disease. To date, the Delta, Gamma, and Mu variants have accounted for nearly 80% of the evaluable cases in the trial. Recruitment in Latin America, Europe, and Africa accounted for 55%, 23%, and 15% of the study population, respectively.

Merck officials said they expect to produce 10 million courses of treatment by the end of 2021, with more doses expected to be produced in 2022.

Earlier this year, Merck entered into a procurement agreement with the U.S. Government under which Merck will supply approximately 1.7 million courses of molnupiravir to the U.S. government, upon EUA or approval from the FDA. Additionally, Merck has entered into supply and purchase agreements for molnupiravir with other governments worldwide, pending regulatory authorization, and is currently in discussions with other governments.

Evidence indicates that a vaccine mandate that went into effect in New York in late September has led to more healthcare workers getting vaccinated against COVID-19, according to a report by Business Insider. State data shows that 87% of hospital workers in the state are now fully vaccinated.

“This new information shows that holding firm on the vaccine mandate for healthcare workers is simply the right thing to do to protect our vulnerable family members and loved ones from COVID-19,” said New York Gov. Kathy Hochul in a prepared statement. “I am pleased to see that healthcare workers are getting vaccinated to keep New Yorkers safe, and I am continuing to monitor developments and ready to take action to alleviate potential staffing shortage situations in our healthcare systems.”

Learn more about vaccine boosters and efficacy in the recent webinar by Dr. Margaret Fitzgerald, Moving from COVID-19 Pandemic to COVID-19 Endemic.

The Centers for Disease Control and Prevention (CDC) is urging healthcare providers to encourage pregnant women to get a COVID-19 vaccine to protect themselves and their babies.

An urgent advisory from the CDC follows data showing symptomatic pregnant women with COVID-19 have more than a two-fold increased risk of requiring ICU admission and invasive ventilation, as well as a 70% increased risk of death.

As of September 27, more than 125,000 pregnant women had been infected with COVID-19, resulting in more than 22,000 hospitalizations and 161 deaths, according to CDC data. August was the deadliest month of the pandemic on record for pregnant women, with a total of 22 deaths.

According to CDC data, less than one-third of pregnant women have received a COVID-19 vaccine, and the decision to remain unvaccinated by many has led to increased risk of adverse pregnancy outcomes, such as stillbirth, preterm birth, and admission to neonatal intensive care units.

When it comes to booster shots, the CDC has not yet recommended a third dose of the vaccine for those who are expecting.

Reports of new COVID-19 cases continue to drop across the United States, leading healthcare officials to believe the summer surge is lessening.

According to a recent report by the New York Times, progress has been especially pronounced in Southern states that had previously experienced the highest infection rates.

There are about 20,000 fewer coronavirus patients hospitalized nationwide as there were at the start of September. Parts of the Mountain West, including Wyoming and Montana, could be starting to stabilize after having reported some of the country’s worst outbreaks in recent weeks.

Daily case reports also reportedly continue to plummet in the South, with Florida, which averaged more than 20,000 cases per day during much of August, now reporting fewer than 6,000 infections per day. Louisiana, which was averaging more than 5,000 cases daily in recent weeks, is now reporting about 1,000 cases each day.

Nearly 2,000 coronavirus deaths are still being reported each day, however. Alaska leads the country in recent cases per capita.