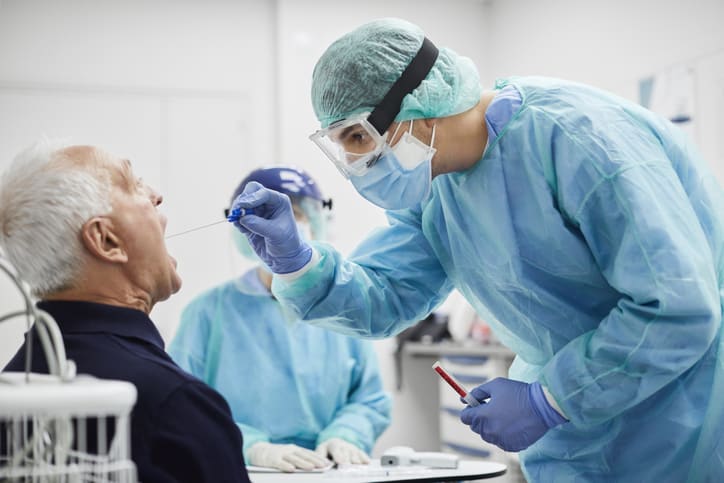 At least 111 million cases of coronavirus (COVID-19) have been diagnosed worldwide as of Monday evening, February, 22, 2021, including at least 2.47 million deaths. Healthcare officials in the United States have reported at least 28.2 million positive COVID-19 cases and approximately 500,000 deaths. Source: Johns Hopkins University & Medicine

At least 208 million individual does of COVID-19 vaccine have been administered worldwide as of Monday evening, including more than 63 million in the United States. Source: GitHub

A new study has revealed that at least seven COVID virus variants have been detected in the United States, in addition to the variants previously discovered in the United Kingdom and South Africa.

According to a report by the New York Times, the seven growing lineages spotted in various states across the country have evolved a mutation in the same genetic letter and are potentially becoming contagious threats of their own. The mutation appears in a gene that influences how the virus enters human cells.

Although no longer among the candidates developing a COVID-19 vaccine, officials at Merck are reportedly exploring ways to assist worldwide distribution of the approved vaccines.

Among the efforts to help the cause are the potential use of plants that can fill the bulk product into ready-to-ship vials, as well as working on a potential booster shot that may bee needed against emerging variants.

As the COVID-19 vaccine continues to be rolled out to the most vulnerable adults across the country, an urgency to authorize a vaccine for children is being felt, according to a recent report by ABC News.

Clinical trials involving children move more slowly, but it’s anticipated that those kids ages 12-15 may be eligible to receive a vaccine by late spring or early summer and that children as young as first grade might be able to receive the vaccine by fall of 2021.

As of February 4, 2021, nearly 3 million American children had tested positive for the virus since the onset of the pandemic, representing 12.9% of all cases in states that report cases by age, according to the American Academy of Pediatrics and the Children’s Hospital Association. Approximately 25% of the country’s population is younger than 18, according to the 2010 Census. At least 2,060 U.S. children have been diagnosed with multisystem inflammatory syndrome, a rare and extreme immune system response linked to COVID-19 that has killed at least 30 people through Feb. 8, 2021, according to the U.S. Centers for Disease Control & Prevention.

Both Pfizer and Moderna have begun adolescent trials in children as young as age 12.

Officials with the U.S. Centers for Disease Control and Prevention (CDC) are reporting that 63% of 18-to-24-year-olds are experiencing symptoms of anxiety or depression during the covid pandemic. As many as 25% of these individuals have said they’ve increased their substance use due to stress, with another 25% saying they have seriously considered suicide.

Additionally, a survey conducted by the Healthy Minds Network has found that 80% of college students have reported that COVID-19 has negatively impacted their mental health.

Reasons for the problems associated with mental health include a rise in uncertainty and the experience of loss, which is not always connected to deaths.

Research by Mental Health America found that between April and September of 2020, 70% of people reported that loneliness or isolation was the top-contributing factor to mental health issues.