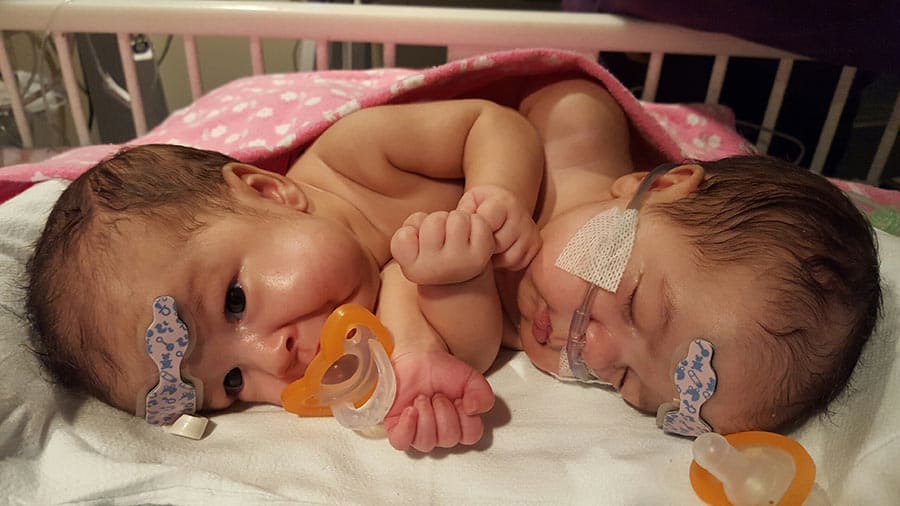 In December 2015, at 21 weeks’ gestation, parents Mark and Jackie learned that they were expecting twins. They also learned that the babies were joined from heart to liver.

Conjoined twins occur 1 in every 200,000 live births, according to the University of Maryland Medical Center. The most common classification of conjoined twin is thoracopagus (40%), an upper torso connection, and the second most common is the omphalopagus (33%) conjoined twin, in which the babies are connected from the breastbone to the waist. Rare is the case when two babies are joined by a thoraco-omphalopagus connection-at the heart, liver, sternum and diaphragm-but it’s not impossible.

The babies’ physician believed the outlook was unfavorable for such a connection, and if the babies even made it to term, they were unlikely to survive. But the parents didn’t give up. They sought a second opinion.

Deciding to Separate
Jennifer Co-Vu, MD, FAAP, a specialist in fetal cardiac care at the University of Florida Health Shands Hospital (UF Health), consulted with the parents-to-be. Looking at the twins in utero, Co-Vu believed there was a plane of separation between the babies’ shared heart. She decided to check with her colleagues to see if a separation surgery would be plausible.

After some deliberation, Co-Vu told the parents that their babies-Savannah and Scarlett-might have a fighting chance for separation after birth. It would be a high-risk procedure, she said, and three outcomes to the separation surgery were possible: Both babies would survive, one baby would live and the other would not, or both babies could die. The parents decided to move forward with UF Health and the surgery.

Living in the NICU
The twins were born in April 2016 at just under 36 weeks’ gestation.

“The babies were initially in the NICU,” said Co-Vu during a press conference held at UF Health in September, “and the NICU team did a great job in taking care of the babies pre-surgery.”

NICU nurse Sara Garnto, RN, who has a background in pediatric cardiology nursing, worked with the twins from their second day of life. “The first time I met them and saw them, I cried,” she said, remarking on how beautiful they were.

The NICU at UF Health has an open ward so that the nurses can see and monitor how newborns are progressing. However, the twins’ parents wanted privacy for their girls. They were concerned about having strangers in the room with such a delicate case, so they asked that only the nurses and doctors directly connected to the situation be allowed to see the babies.

“Visitors were screened. We did our best to honor the parents’ wishes,” Garnto explained. “You have these babies and you want to take them home to a nursery, and that didn’t happen. We tried to keep that in mind when caring for them.”

In the beginning, two nurses were assigned to monitor each baby per shift. Once the girls stabilized, only one nurse was on duty at a time.

The Learning Curve
With a set of conjoined twins, two of everything were necessary in their private sector of the NICU-two monitors, two sets of cords and two sets of tubes. “We were constantly trying to provide care without stressing out the other baby. It was a big learning curve,” said Garnto. “Every shift was something different, even if it was learning their individual preferences.”

Because conjoined twins are rare, not many nurses at UF Health had worked with such cases. A typical NICU nurse provides family-centered care, checks on vital signs and teaches parents how to change diapers and take temperatures. But with two babies who shared a heart, the team required a different approach.

“As much as you have to treat them as two separate entities, you have to look at them physiologically,” Garnto said. Sometimes a medication would only affect one twin, or one baby would be tired and the other wouldn’t be. Garnto had to learn how to treat the girls as a whole before she could attend to their individual needs.

The learning curves weren’t just medical. “I remember wondering, ‘How do we turn them?'” Garnto said. Babies in the NICU need to be turned side to side. With the twins, the team had to lift the babies almost to a standing position and then place them on their opposite side. The process required two nurses, because each baby was connected to multiple cords and tubes that could get in the way or become tangled while repositioning them.

Pre-Surgery Prep
The NICU period was vital to the infants’ ability to undergo surgery. “The time spent in the neonatal intensive care unit was critical in getting the babies ready and keeping them stable for this separation, which can be very traumatic for both babies,” said Mark Bleiweis, MD, chief of pediatric and congenital cardiovascular surgery.

Garnto said having the same set of nurses and physicians involved with the girls’ care helped prepare the twins for surgery. The family was comfortable with Garnto, and this helped set their minds at ease. Garnto could see small changes in the babies, such as signs of cardiac stress or if one twin was reacting differently from the other to a medication. A team of rotating nurses may not have seen these subtle changes, explained Garnto. The changes could be so small from one shift to the next that they could be overlooked. Garnto knew when the babies’ vitals changed.

“At around age 2 months, after multiple imaging and multiple interdisciplinary meetings, we decided to separate the babies,” Co-Vu said.

The surgeons spent months prepping for the separation surgery. Garnto said the cardiac team had to look at the babies on the macro level, even though they were looking inside the babies’ heart. The NICU team prepped the girls for surgery on the micro level, feeding them, bathing them and monitoring their vitals. The open ward of the NICU enabled the nursing team to get the babies to and from their scheduled screenings, imaging and procedures in a timely manner.

As part of the prep, the cardiology team at UF Health decided to recreate the babies’ heart using modern technology. From a cardiac CT scan, UF Health clinicians were able to have a 3-dimensional to-scale model of the twins’ heart printed by 3D Systems. It was roughly the size of an apple.

Bleiweis, who performed the twins’ heart separation in June 2016, said the 3-D heart made the separation easier for the team in that it made it safer; the printed heart was designed like a puzzle that could be taken apart and put back together again. Bleiweis had the chance to see inside the heart before surgery. Knowing where the veins were enabled the team to avoid them during separation.

The liver was challenging, according to Saleem Islam, MD, MPH, chief of the division of pediatric surgery in the UF College of Medicine and the lead separation surgeon on the twins’ liver. “It was, essentially, one giant liver,” he said.

Unlike the heart, the surgical team working on the liver did not have a printed 3-D model. Islam had to wait until surgery to view the organ. Luckily, the team found the plane of separation for the liver.

Garnto said that when the twins went into surgery, she couldn’t sleep, “You can plan and you can plan, but with a surgery like that, anything can happen.” Fortunately, the surgery, which lasted from 6 to 8 hours, was successful, and within 6 to 7 weeks, both babies were off their ventilators and learning to breathe on their own. “They really are a miracle,” Garnto added.

It Takes a Village
“We had multiple interdisciplinary meetings as to what the plan was,” said Co-Vu. She commented that it took hundreds of hours to plan the minute details of the surgery. “Without the different teams and different subspecialties,” said Co-Vu, “I don’t think this [would have been] a great success.”

“It took a village, literally, to separate the twins,” said Islam.

Months later, both babies are doing well, but the girls’ journey isn’t over; mom Jackie has been documenting the surgical process on her blog. The family also set up a GoFundMe page, which anyone can view to donate to the girls’ surgery costs.

“I never thought I would be a part of something like this,” Garnto said. She has been able to stay on the twins’ case after surgery as a pediatric cardiology nurse, though she is only assigned to one twin. The girls, she said, were discharged in September. As part of the home prep, the team taught the parents how to watch for signs of stress in either baby, monitor blood pressure and track how much each baby is urinating.

“I feel super honored to take care of them, and all the other nurses do, too. It’s amazing to see them go from conjoined to two babies,” Garnto said.

Autumn Heisler is a former staff writer for ADVANCE for Nursing.