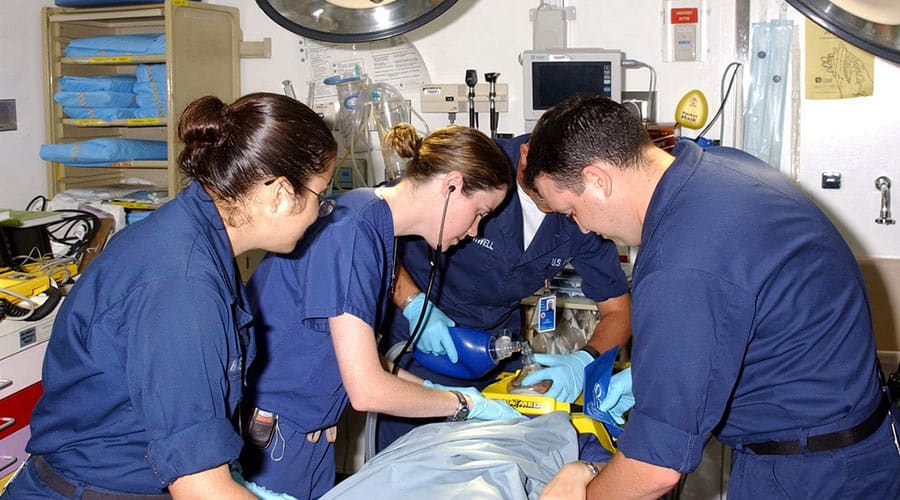 Pittsburgh PICU supports parents who want to be present during CPR

A debate over whether or not to allow family members at the bedside of their loved ones during CPR events has been ongoing since the early 1990s. Though many believe the family has a right to be present, some healthcare providers are hesitant about giving the family permission to stay during resuscitation.

But at the Children’s Hospital of Pittsburgh of UPMC (CHP), the debate is long settled. The pediatric intensive care unit (PICU) implemented a program designed to assist the parents of children during incidents of resuscitation.

The care delivery model at CHP is patient- and family-centered, which helped further the team’s efforts in taking the next step to support families during a child’s medical crisis. The Parent Advocacy Group for Events of Resuscitation (PAGER) program was created to provide parents with assistance from medical personnel during CPR events.

Step one in establishing PAGER required a core nurse team to collect the PICU’s CPR data over a 12-month period. During that time, eight CPR events occurred in the PICU’s 36-bed facility. Family members were given the option to be present during six of the eight CPR events and had the aid and support of at least one provider-a clinical social worker, physician, nurse or care coordinator-throughout the medical crisis.

The collected survey data helped develop a 2-hour class teaching nurses how to help the whole family during a medical crisis. “Nurses participated in each 2-hour class, and role playing was a significant part of the curriculum” explained Alicia Duss, RN, BSN, CCRN, a clinical leader in the CHP PICU. “Role play provided us with the opportunity to practice and evaluate how we manage families who are at a highly vulnerable time in their lives.”

A self-defense class was also offered to the nurses. Duss said, “The self-defense class, which was an 8-hour course, played an important role in making me feel confident during potentially challenging situations with families who are in crisis.”

The class, role playing and self-defense lessons became a part of the PAGER training. Staff members who went through the training are now CHP’s PAGER members. They are designated by a special PAGER pin and include seven PICU staff nurses, two clinical leaders, the PICU educator, a clinical nurse leader, a clinical nurse specialist, a clinical social worker and a physician.

Each PAGER member was taught how to facilitate family presence during CPR. Criteria were developed as a foundation:

Within 2 months of launch, the program’s designated PAGER members assisted in two CPR events. Each nurse present during an event wrote summaries and reflected on the overall experience. In an article published in Critical Care Nurse, one CHP nurse reflected: “A family was at the bedside during their daughter’s CPR. When chest compressions began, we brought the family in closely to lie with her until she died. The family appreciated the opportunity to say goodbye while their daughter was still alive.”

The staff also found that family presence did not impede the workflow of the PICU staff. Instead, the nurses found that their duty was to the patient’s family and the family’s wishes to be with their child.

“As a PAGER nurse, I feel like my main role is to ensure we are getting parents back to the bedside as soon as possible, making sure someone is contacting parents via phone if a parent is not present in the waiting room and making sure someone is sitting with immediate family to help answer their questions and address their basic needs,” said Sandra Kitcho, RN, BSN, CCRN, a PICU professional staff nurse.

“From a nursing perspective-from a holistic approach-what’s more holistic than helping the whole family unit?” commented Cathie Guzzetta, PhD, RN, FAAN, a nursing research consultant and clinical professor at George Washington University School of Nursing in Washington, DC. Guzzetta has been advocating for family presence at the bedside for years. “The Pittsburgh team is a great example of taking [this practice] to the next level,” she said.

Guzzetta shared with ADVANCE the story of a nurse from many years ago, before family presence started to become commonplace. The nurse had let a mother stay with her son as he passed away. “We didn’t know family presence was important,” said Guzzetta, explaining the belief was that family members would interrupt patient care or find the ordeal too traumatic.

“[The program] has helped nurses be more in tune with parents’ needs, wishes and desires,” said Kitcho.

With time, the stigmas surrounding family presence during CPR events have started to fade, yet some still believe the practice isn’t a good idea. Guzzetta said the PICU at CHP approached the subject right: “If you haven’t thought about it or done it, you’re likely to have a resistance.” By having a survey to see general staff views, Pittsburgh was able to talk through any fears and hesitations, she said.

Planning for the Future

“Continuing education opportunities are offered to the PAGER nurses, and they track these themselves,” Pasek said. “The future of this initiative is to grow the PAGER program and develop additional PAGER nurses.”

Guzzetta also said that the PAGER process is one to follow: survey the attitude of the staff, put the exact process in writing, and then train the staff accordingly. “That whole process can alleviate so many fears about it,” she said.

Autumn Heisler is a former staff writer for ADVANCE for Nursing.