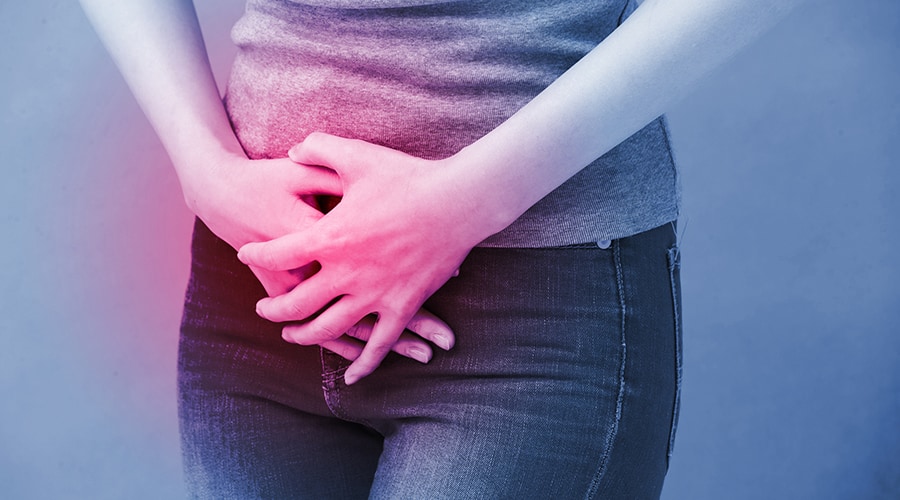 Interstitial cystitis/bladder pain syndrome (IC/BPS) is defined by the hallmark symptom of chronic pain described by patients as being localized to the pelvic organs, pelvic floor myofascial support, or external genitalia often accompanied by urinary symptoms, such as urgency or frequency. IC/BPS occurs in both males and females over a broad age range and across ethnic/racial groups. The morbidity of IC/BPS is substantial and often leads to poor quality of life for both patients and their partners.

The signs and symptoms of interstitial cystitis vary from person to person and may vary over time, periodically flaring in response to common triggers, such as menstruation, sitting for a long time, stress, exercise and sexual activity.

Interstitial cystitis signs and symptoms include:

Symptoms severity is different for everyone, and some people may experience symptom-free periods.

Patients with IC struggle to find the right combination of treatments. There’s little consensus on the best way to treat IC, but treatment generally starts with conservative measures and proceeds to more invasive ones if symptoms don’t improve. Usually, a combination of approaches is needed.

One treatment to consider is antihistamines. Antihistamines are listed as step two treatment options in the AUA guidelines for IC/BPS. The use of them often leads to symptom relief in patients who struggle with IC.

So how does this work? Histamine is involved in the inflammatory response and has a central role as a mediator of itching. As part of an immune response to foreign pathogens, histamine is produced by basophils and by mast cells found in nearby connective tissues. Histamine increases the permeability of the capillaries to white blood cells and some proteins, to allow them to engage pathogens in the infected tissues. The wall of the bladder contains the same kind of mast cells that also generate typical allergy symptoms.  Since histamine is a central component in the inflammation response, it will rush to the site of injury. With chronic conditions such as IC, inflammation will be sent to the area at a much faster rate than it can be cleared away. This lingering inflammation causes additional issues such as pain, causing the body to create more inflammation. Antihistamines break up this loop by reducing the inflammation response.

Hydroxyzine hydrochloride remains the most effective agent for the management of mast cell dysfunction. Because of its sedative properties, it is generally administered at night in doses ranging from 25 to 75 mg. In patients who are highly sensitive, doses as low as 10 mg can be used. In the spring and fall, when many IC patients suffer from seasonal allergies, an additional 10–25 mg every 6 hours can be beneficial. In patients who cannot tolerate a sedating antihistamine, cetirizine hydrochloride may be a reasonable alternative. The addition of H2 blockers to more standard antihistamine therapy has been reported, but the results are somewhat inconclusive.

The IC network discussed some recent research on options for people with IC.

“Since 2001, montelukast (brand name Singulair) has shown decent enough promise that at this year’s American Urological Association meeting, Dr. Robert Evans suggested IC patients take montelukast during allergy season if they also have asthma. Montelukast is an oral anti-inflammatory that is used to treat allergies and prevent asthma attacks. Montelukast targets leukotrienes specifically. Leukotrienes are chemicals the body releases after coming into contact with an allergen or allergy trigger.

Researchers suspect that leukotrienes play a role in IC. The first findings correlating IC treatment to montelukast were presented in November 2001 from researchers in Denmark. The small study included 10 women who were diagnosed with IC based on the NIDDK definition of IC. The woman all also had to have mast cells in their muscle tissue. The women took montelukast daily for three months. After one month of treatment, all of the women showed a statistically significant reduction in urinary frequency, nocturia and pain. By the end of the three months, the results remained just as positive. The women went from an average of voiding 17.4 times a day down to 12. Nocturia went from an average of 4.5 down to 2.8. Pain decreased from 46.8 to 19.6 on a visual analog scale. None of the women suffered from side effects. The researchers felt the findings were significant and further studies were needed.

Four years later, a group of researchers from the School of Pharmacy and Health Professions at Creighton University in Nebraska released findings about montelukast and IC. The researchers followed a 64-year-old male who had a history of IC. His previous treatments had not been very beneficial. When he was prescribed montelukast for seasonal allergies, though, he also experienced a great improvement in urgency and pain. His urinary symptoms returned when he stopped taking the montelukast, prompting the researchers to conclude the montelukast was the cause of his improved IC symptoms. They also felt like montelukast seemed a promising treatment for IC but further research was necessary.

That leads to June of 2018 when a group of researchers from the United States, Pakistan and India came together and released a case report and review of literature about the benefit of montelukast in treating IC patients. They followed a 28-year-old female patient who was diagnosed with IC. While in the hospital for IC symptoms, the patient had two asthma attacks and was given an inhaler as well as montelukast. While the medication helped her shortness of breath and asthma symptoms, the patient also noticed the next day that her urinary symptoms were better. She continued to take montelukast after being released from the hospital and two months later reported that her symptoms were substantially reduced and her suprapubic pain, which had been intense before, was gone. The researchers believe that montelukast worked for her IC symptoms in great part because montelukast inhibits leukotriene receptors in the bladder, which prevents mast cells from being activated.”

For patients with moderate-to-severe IC, a therapeutic regimen of Elmiron combined with antihistamines, antidepressants, and analgesics may be used.

While it appears that more research is needed for treating IC symptoms with antihistamines, patients should discuss this option with their doctor to determine if it is a safe, effective addition to their treatment plan.