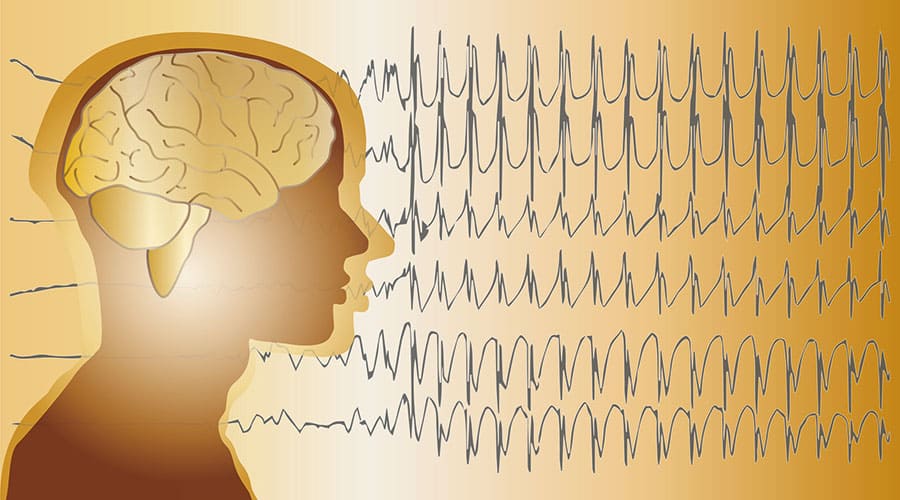 Find out how to identify this often missed medical emergency: non-convulsive status epilepticus

A nurse on duty on a med/surg floor encounters a middle-age patient wandering in the hall. While speaking to the patient she notices that this normally alert and oriented person now appears confused and disoriented. As an experienced RN, numerous possibilities as to what is wrong with this patient run through her mind: head trauma, CVA, psychiatric disorder, side effect of medications, hypoglycemia, cardiac dysrhythmia.

A nurse in a long-term care facility for children with neurological challenges is called to see a 4-year-old girl with severe psychomotor retardation and seizure disorder. Upon arrival, the nurse sees the girl is convulsing, but the seizure ends spontaneously after 1 minute. Now postictal, the girl appears safe but unresponsive, and remains in this unresponsive state during the next hour, which is much longer than her usually short postictal state.

Although the definition of SE is a matter of debate and review, as defined by the World Health Organization and classic literature, SE traditionally refers to a prolonged (greater than 30 minutes) seizure or seizures occurring recurrently without a return to the patient’s neurological baseline.1,2

SE is a common problem, with more than 150,000 cases annually in the United States alone, leading to 42,000 deaths and with costs of $3.8 billion-$7 billion.3 Research has shown that 5-25 percent of SE cases are non-convulsive,4 appearing in any age group,5 but most commonly in young children or adults over the age of 60.3 For our purposes we will define SE as either convulsive SE (CSE) or non-convulsive SE (NCSE), such as in the cases presented above.

When envisioning SE, we commonly think of the often dramatic CSE, with possibly severe cardiorespiratory, neurological, renal and metabolic sequelae and high associated morbidity. Lesser known is that NCSE is also a medical emergency, as it is thought by some researchers believe it may lead to some degree of neuronal damage in the brain6 (in addition to the danger presented to the patient’s safety as a result of changes in mental status) and is also associated with high morbidity.4,5

NCSE, as in all cases of SE, may be brought on by acute and chronic causes such as brain tumor, infection, fever, head trauma, CVA, metabolic problems, alcohol abuse or withdrawal.

Among people with epilepsy, any of the acute causes may precipitate NCSE, but NCSE also may occur as a result of reduced or changed doses of antiepileptic medications or non-compliance with the medication regimen.

Recognizing NCSE early is a critical goal, as it is believed that rapid treatment may improve outcomes.4 The greatest challenge facing clinicians in recognizing NCSE lies in the very fact that it is non-convulsive and may mimic many other disease states. But there are clues to help recognize NCSE for what it is.

Foremost is the hallmark sign of NCSE: a change in the patient’s mental state. The patient may appear confused, agitated, excited, disoriented or not as responsive as he normally is. He may appear psychotic or with a suddenly changed personality.

In addition to the changed mental status, research has shown that patients in NCSE often also have abnormal ocular movements, including changes in the size of the pupils (hippus), nystagmus or sustained eye movements in any direction.1

The patient also may present with automatisms such as smacking his lips repeatedly or chewing. The patient may have limb or facial twitching or, less commonly, the person in NCSE wanders aimlessly.

We also should suspect NCSE in patients who have had a convulsive seizure with a prolonged non-convulsive postictal state without return to their pre-seizure neurological baseline (this may include confusion or even what appears to be a comatose state).

Unlike CSE, in which the convulsive state makes diagnosis fairly straightforward, it is very difficult to base a diagnosis of NCSE upon the clinical picture alone. This is especially true with patients with an altered state of consciousness or psychiatric illness as their baseline. Although in some cases cessation of seizure activity after administration of IV benzodiazepines is used as a diagnostic tool to evaluate NCSE, in most literature the only definitive diagnosis of NCSE is by EEG.1

Of critical importance for all clinicians to know is that in any case where NCSE is suspected, we need to refer the patient as quickly as possible for a neurology consult to ensure rapid diagnosis.

The approach to NCSE, as in all cases of SE, is to recognize it as fast as possible and intervene immediately to ensure the patients’ safety and stop the seizure.

Treatment regimens are a matter of considerable debate among clinicians and will vary from facility to facility, but after a diagnosis of NCSE has been made, treatment will most likely include:

• ensuring a safe environment for the patient;

• assessing and maintaining the patient’s airway, breathing and circulatory status;

• evaluating and addressing underlying causes of this episode of NCSE (some may be acute and treatable), which will likely include labs for serum electrolytes and glucose, toxic drug screen, antiepileptic medication serum drug levels, CBC and kidney functions. The clinician may wish to perform a head MRI or CT and later, a lumbar puncture to rule out any infection;

• administering (if possible) oral benzodiazepines such as diazepam or lorazepam, or rectal diazepam;

• initiating intravenous access and giving drug therapy, which most likely will include benzodiazepines. The patient also may be administered IV phenytoin, valproate or phenobarbital. Remember to closely follow the patient, as these medications may cause severe adverse reactions such as cardiorespiratory depression;

• closely monitoring the patient’s neurological status (which may include continuing EEG monitoring), as changes may indicate cessation of seizure activity or the opposite;

• continued interventions as per your facility protocol.

Seizure: Disturbances of the cortex due to an abnormal and disorganized discharge of brain cells.

Partial seizures: Seizures that arise from dysfunction of one specific area of the cortex. May be classified as simple when there is no impairment of consciousness but may cause somatosensory or psychic symptoms, or complex when consciousness is impaired in addition to psychomotor, cognitive and somatosensory symptoms.

Absence seizure (once known as petit mal): A type of generalized seizure with a change in consciousness with only subtle or no motor symptoms at all.

Ken Ehrlich is a charge nurse at ALEH Institute in Jerusalem, caring for children with severe neurological challenges. He is an educator at Shaare Tzedek Nursing School in Jerusalem and volunteers at his local Rape Crisis Hotline for male victims of sexual assault.