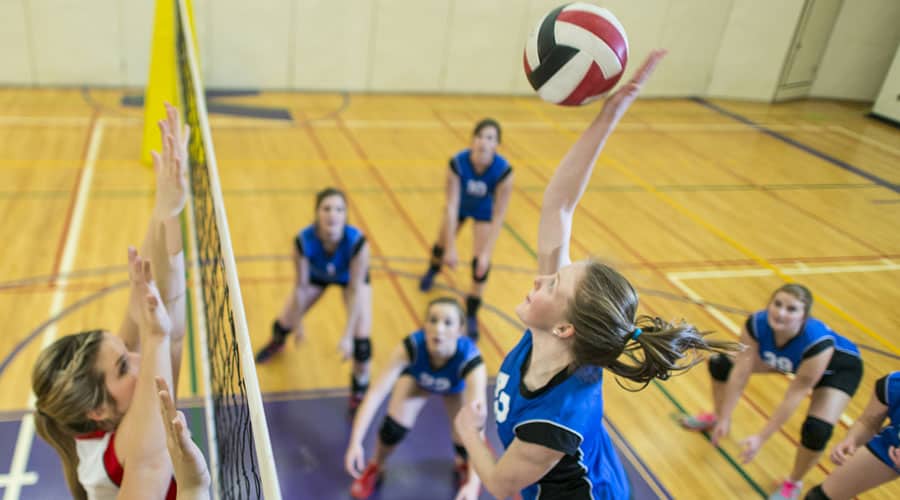 About seven months ago, my 12-year-old daughter discovered a new hobby—volleyball.

She’d played softball since a young age, but last summer she met a couple of teammates who were active in volleyball and encouraged her to give it a try. She signed up for a couple of local camps, enjoyed the game, and kept on practicing throughout the summer.

Before we knew it, she’d tried out and made the seventh-grade team at her middle school.

Volleyball season was one of her greatest challenges and triumphs. Through the season, she improved from being one of the last players off the bench to being a starter for the final four games of the year. But around the same time, she started complaining about a sore left ankle after every practice. Soon, it was sore even on days she wasn’t practicing.

“No,” she replied. “I really don’t know what happened.”

The thought of skipping games was intolerable to her, so she battled through the last few contests of the season. Three days after the last game, she sat barefoot in an orthopedist’s office.

A brief examination, mobility and pain tolerance tests yielded a diagnosis of a sprained ankle, landing her in a brace for the next four weeks. The brace was a black piece of fabric that laced up and appeared to be almost a cross between a sock and a shoe. At times, it seemed to be helping, and as 12-year-olds do, she would go outside without the brace, or engage in activities (such as dancing with friends on Instagram videos) that were forbidden by the doctor.

Sure enough, upon returning to the doctor’s office, sufficient progress had not been made. Now she was relegated to an ankle boot—a larger, bulkier device that went almost up to her knee. Physical activity was forbidden for the next several weeks. One look at this boot showed that as long as it was in place, physical activity wouldn’t even be an option.

Her mother and I figured the boot would take care of the problem. There was no way to ‘sneak’ outside without this thing, and it certainly immobilized the injured area. So it was particularly surprising when, after two weeks in the boot, our daughter said her ankle was “probably a little worse” and in addition, her knee was sore. That made sense, I thought. As mentioned, the boot was quite large and altered her gait considerably.

To be sure, her mother rolled up the leg of our daughter’s pants. Her knee was more than twice its normal size.

We sought the advice of a local doctor, a man with over 40 years’ experience who’d seen it all. On the day of the appointment, he observed her swollen ankle, and an even more pronounced swelling in the knee and declared “I don’t doubt that her ankle is sprained, or that it was at one time—but that’s not the only thing going on here.”

Proving his point, he cleaned the area of the knee to prepare it for aspiration, a process he explained would produce approximately 5cc of fluid that could be tested for the presence of certain conditions. The one he kept mentioning was Lyme disease.

It wasn’t a pleasant thought, but it wasn’t much of a stretch either. Our area is notorious for the presence of deer and subsequently, deer ticks, and this is a kid who spent significant periods of time at swimming pools, on softball fields, in open areas where deer can congregate. Our neighborhood itself was nothing more than woods 20 years ago. It wasn’t too hard to imagine Lyme disease as a possibility, but it was still quite a progression from an ankle sprain.

Meanwhile, the knee was aspirated, producing the promised 5cc in fluid… and plenty more. In all, the doctor took 50cc of fluid out of her swollen knee.

He immediately recommended an MRI while sending the fluid off for testing. His confidence in the Lyme disease possibility seemed shaken, but only the test would tell.

A week later, we returned to his office for results. She tested negative for Lyme disease, but the MRI showed two completely torn ankle ligaments and two other partial tears. I’m not a doctor, but I’ve had enough foot/ankle injuries to be highly suspicious that she’d sustained such a severe injury with no ability to recall it happening.

As for the doctor, he knew he was out of his element. He offered a few thoughts on possibilities, then recommended us to a pediatric specialist.

On the way out the door, this man with over 40 years’ experience gave us one last direction.

“When you get this figured out,” he urged, “call my office and let me know what’s going on. That’s the only way I’ll figure this one out.”

The following week, the specialist at Children’s Hospital of Philadelphia started our appointment with an interesting declaration.
“You don’t have a sprained ankle,” he told my daughter. “Maybe you did at first, but that’s not what’s hurting you now.”

The MRI, he explained, was considerably distorted by an accumulation of fluid in her ankle similar to what her doctor has taken from her knee. Aspirating an ankle, however, was considerably more involved. Best of all, he had a name for what she was experiencing—juvenile idiopathic arthritis.

“Idiopathic,” he joked to my daughter, “means all us doctors are idiots and can’t figure this out.”

The doctor was anything but an idiot, but the word ‘idiopathic’ meaning ‘of unknown origin’ meant he had no better idea how this had occurred than we did. JIA means the immune system is mistakenly attacking the body’s tissues, causing inflammation throughout the body but especially in the joints. There is no known cure, but early, aggressive treatment may lead to remission. His immediate recommendation? Lose the boot, and start taking naproxen twice a day to see if it relieves the swelling. Sure enough, it did.

On a subsequent visit, blood testing and a further examination confirmed the juvenile idiopathic arthritis (JIA) diagnosis. One week later, my daughter received a cortisone shot in her left knee.

Using an ultrasound, she received similar shots in the ankle area, but both doctors advised that there was fluid in that ankle area they couldn’t access. They are hoping it would resolve without further intervention. If not, she will have to visit yet another doctor for more shots.

She was also told to see an eye doctor as soon as possible since certain forms of the disease can also impact eyesight…something we never would have guessed. And because we had noted that she seemed more tired than usual it was advised that she start taking vitamins with iron as her tests showed slight anemia, also a side effect of continuous inflammation.

After all that, they asked if my daughter had any questions. After three months of treatment, diagnoses, and frustration, she sure did.

“Does this mean I can start playing softball again?”

Fortunately, the answer was yes. She returned to softball practices the following week, and her knee appears to be back to normal. The ankle is another story. For a time it seems to be fine and then after a while, it flares up again with pain and she’s back to taking Naproxen. She’s still hesitant to go 100 percent for fear of re-injuring herself—even though it may be the only way to get back to normal as exercise is highly recommended for patients with a JIA diagnosis.

So little is known about where and how the disease develops in children that when we back for her first treatment we were asked to take part in a new study in hopes of identifying patterns that could result in new treatments and intervention over time. Of course, we said yes immediately.

Meanwhile, she is much less tired, able to get around with some minor pain and we’re on a monthly follow-up schedule with the doctors, a schedule that will take us back to the office this week for more blood tests and the next step in the journey.

Who knew that a sore ankle could take us down such an unexpected path?