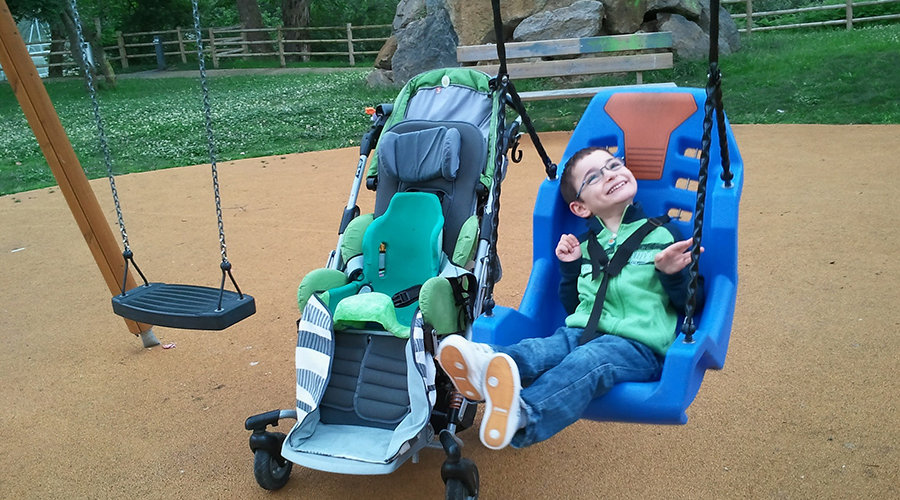 SMA encompasses a set of diseases affecting the anterior horn cells of the spinal cord.

Spinal Muscle Atrophy (SMA) has been in the news lately regarding treatments which may slow the progression, or even reverse the effects of this disease. SMA is a genetic disorder causing paralysis. SMA encompasses a set of diseases affecting the anterior horn cells of the spinal cord. The most common form of spinal muscular atrophy is caused by deletion of the survival motor neuron 1 gene (SMN1), located on chromosome 5q13.1. The manifestations of this disease were first described by Guido Werdnig in 1891 and Johan Hoffmann in1893. Subsequently, the most severe form of (SMA) was named Wernig-Hoffman Disease. Other intermediate and milder forms were discovered into the 1950s, primarily attributed to work done by Kugelburg and Welander (Kugelburg-Welander Disease).1,2,3

As an inherited disorder, SMA occurs in between 1/6000 to 1/10000 children; second only cystic fibrosis, with the highest incidence of death of any inherited syndrome in infants. 1,2,4,5,6   The genetic defects responsible for SMA impede the instruction to motor neurons given by SMN 1, resulting in the expression of the SMA protein. 1,5,6 Inheritance of this genetic mutation is typically autosomal recessive; although dominant, recessive and X linked forms have been described occurring on chromosome 5q12 linked to the SMA gene.2   Although the precise function of this gene is not known, the number of SMA2 gene copies determines whether the child has type I, II, III, or IV SMA. 7

Tests used for the diagnosis of SMA include blood tests, muscle biopsy, genetic tests, and electromyography (EMG). The histologic evidence found in muscle biopsy specimens will show denervation without other histologic abnormalities. 1 Genetic testing used to detect the SMN1 gene are the gold standard in diagnosing spinal muscular atrophy, and typically there is no need for a muscle biopsy. 4 A diagnosis can also be made by electrophysiological evidence of denervation with intact motor and sensory nerve conduction findings. 3

Expression of the SMA protein results in loss of alpha motor neurons in the spinal cord, muscular atrophy, neuromuscular junction denervation, and paralysis caused by loss of neural cells in the brainstem and the spinal cord. Clinical manifestations in neuro-degenerative diseases come about due to problems with the motor neuron itself and interruptions in synaptic connectivity to the muscle at the neuromuscular junction. 1,4,5,6 Slowly progressive muscle weakness resulting from anterior horn cell degeneration is the common abnormality in patients with any one of the spinal muscular atrophies. 3

Patients with the most common form of SMA, SMN1 deletion on chromosome 5q13.1, develop proximal muscle weakness; in fact, the term proximal spinal muscular atrophy has been used to describe this group of conditions. The classification of spinal muscular atrophy 5q13.1 has a long and somewhat confusing history, in part because until 1995 no diagnostic “gold standard”, namely, a specific genetic test, was available.

Hoffmann initially described spinal muscular atrophy as a disorder causing progressive weakness that begins in infancy, resulting in death at an early, but variable age; and characterized pathologically by anterior horn cell loss. In 1961, Byers and Banker published findings from the first large series of patients with this disease, finding a broad range of severity that previously had not been appreciated. Specifically, they observed that not all patients had a life expectancy of fewer than 4 years, as originally described. In their clinical review of 52 patients, the onset of disease in 25 patients was at birth or within the first 2 months of life (23 patients never sat, and the life expectancy was less than 4 years). The age at onset in 19 patients was between 2 and 12 months (4 patients never sat independently, 15 patients were able to sit independently, and none walked). Five of these 19 patients died between 7 months and 5 years of age; the remainder were still alive at the time of the publication. Eight patients developed clinical manifestations of disease after age 12 months (6 sat, and 2 walked). These patients were still living into their teens at the time of the publication. The authors proposed that 3 distinct groups could be identified based on maximum function achieved. Those who achieved walking abilities had the longest life span.  It has also been surmised that SMA patients lost function over time and that this condition does not “arrest” and is not benign.3

The principal physical findings in SMA are atrophy in the muscles, low tone, and weakness affecting walking, breathing, and swallowing.  Problems with the anterior horn cells cause proximal weakness in the upper extremity, axial, intercostal, and bulbar muscles. The underlying genesis of the myriad forms of SMA is denervation of the muscle due to loss of the signal from the spinal cord. In SMA, either the motor neuron with its axon or the axon itself becomes non-functioning.1,2,4,

Childhood spinal muscular atrophy is now classified by age of onset and progression. Type 1 spinal muscular atrophy (Werdnig-Hoffmann Disease) results in pronounced muscle weakness throughout with hypotonia presenting at birth or within the first 3 months of life. There are feeding problems and respiratory failure typically occurs by 2 years of age. SMA type II usually occurs between the ages 3 and 15. These children are not able to stand or walk but can sit. Unless there are pulmonary difficulties, children with SMA type II usually live into adulthood.  SMA Type III (Kugelberg-Welander Disease) presents in infants or young children between the ages of 2 and 17. This is the mildest form of childhood SMA, and these patients can walk without support. Functional impairments may include difficulties with walking, running, climbing, steps, or rising from a chair. These children may eventually lose the ability to walk. Other complications include scoliosis, osteoporosis, and obesity. Adult-onset SMA is rare and referred to as type III b or type IV. Adult-onset SMA is seen after the age of 18. These individuals are ambulatory and do not have respiratory or feeding issues. SMA has also been linked with Amyotrophic Lateral Sclerosis (ALS). 1,4 Other forms of SMA include the following. Progressive spinobulbar muscular atrophy (Kennedy Syndrome), which is slowly progressive and is inherited by males from their mom, typically between the ages of 20-40. Congenital SMA with arthrogryposis can occur, but it is rare. Persons suffering from persistent contractures of joints that manifests itself at birth. In addition to severe contractures, persons present with scoliosis, micrognathia, deformed chest, breathing difficulties, and ptosis. Arthrogryposis multiplex congenita is a fatty degeneration of the limb musculature. Joints are fixed in flexion or extension with rotation, mainly in the lower limbs and the distal joints. This disorder involves the dorsal horn nucleus, but also the lower motor neuron. 1,8 Scapuloperoneal spinal muscular atrophies were first discovered in 1939. These are autosomal dominant conditions that begin in childhood or adulthood and are diagnosed by the presence of large motor units on electromyography, through sensory potentials and nerve conduction velocities are normal. The mean age of onset is 33, and disease progression is usually slow, with loss of ambulation usually occurring in the fifth decade of life. The distal spinal muscular atrophies are initially characterized by weakness and wasting of distal muscles of the upper and lower extremities, progressing to the weakness of other muscle groups. There are similarities in these patients with those having Charcot-Marie-Tooth disease. 3

With medical advances in recent decades, improvements in the care of persons with SMA has progressed with regard to managing secondary complications extending longevity. Furthermore, pharmacologic and gene therapies are now being developed to cure or lessen the impact of the disease.  If children can be tested before or just after birth for SMA, they can be part of clinical trials earlier, to ameliorate the effects of SMA. Recent clinical trials for SMA focus on increasing the Survivor Motor Neuron protein (SMN), lacking in SMA and encoded by the SMN gene.  However, unless this can be done before motor deficits are evident, loss of SMN may not be stopped, but possibly only slowed. Some of the currently available drugs being utilized are Nusinersen, Olesoxime, and Zolgensma 1,4,5

Even with the advances in medical care and now the development of treatments to change the course of SMA, there has been scant evidence pertaining to the role of physical therapy in children with SMA. With the advent of a new medication that may now improve, or at least maintain function, the potential for greater independence will affect how these individuals are treated. Even when faced with the most severe forms of SMA, children now have greater hope of not just living longer but having an improved quality of life. This has implications for therapists working with these children. Instead of following a treatment model which attempts to slow the decline in physical function and prevent secondary impairments such as contractures or scoliosis, therapists may be able to work toward improving functionality as the child is treated using newly developed treatments. Until further data has been accumulated on children receiving these interventions, it may be difficult to determine how much of a delay in worsening of the symptoms, or improvement can be expected. Furthermore, depending on the type of SMA the individual has, their age, or other medical factors; there may be differences in the effectiveness of the medication. Various treatment modalities such as electrical stimulation, gait training, aquatic therapy, neurodevelopmental treatment, and other procedures performed by therapists will need to be studied in order to determine effective means of treating SMA in conjunction with newly developed medications.