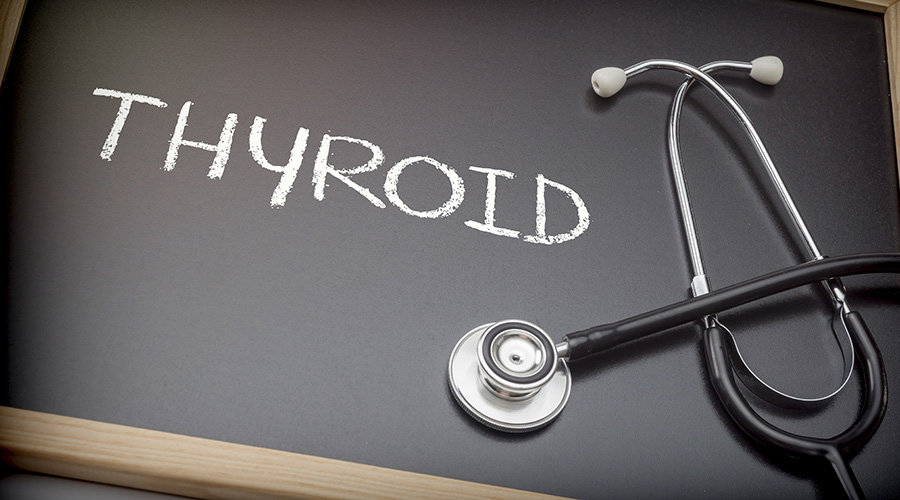 As far as the human body’s organs go, the thyroid is a true multitasker. Responsible for the regulation of metabolic rate, the heart, brain development, bone maintenance, and muscle and digestive function, the gland produces three hormones that are delivered through the bloodstream for a variety of functions, both simple and complex. On a cold night, the thyroid will kick into a higher gear to help warm the body. During pregnancy, the gland goes into clinical overdrive to provide functions for both mom and fetus. With so much responsibility and activity, the thyroid can become inflamed and/or enlarged, known as thyroiditis, an autoimmune condition which, not coincidentally can lead to many different types of consequences ranging in severity. An improperly functioning thyroid can work too much (overactive; hyperthyroidism) or too little (underactive; hypothyroidism). As with all autoimmune diseases, women are more likely to be develop thyroid disease, with about one in eight women expected to develop the disease during their lifetime. A relatively controllable condition, although it is not absent of life-altering and threatening consequences, thyroid disease also presents an assortment of uncertainties that can make diagnosis and treatment somewhat complicated.

According to Peter Singer, MD, a physician in the Keck School of Medicine of the University of Southern California, and Maria Papaleontiou, MD, assistant professor with the University of Michigan, there’s a recent trend of more thyroid disease in the United States, particularly among women—mainly because screening measures have become heightened due to a prevalence of underdiagnosis.

“There has definitely been an increase in the diagnosis of thyroid disease, and as thyroid disease has become more common in women, more women are being diagnosed,” Papaleontiou said. “Increased screening, even in asymptomatic individuals, has led to more mild thyroid dysfunction detection.”
The reason that thyroid disease may have been underdiagnosed at one point in time is that symptoms are multiple and varied, and may be mild, Singer said. “If you look at the list of symptoms for an underactive thyroid, it basically goes from A to Z,” he said. “People are likely to say they’ve been tired, or lost a little weight, or their skin is dry. Well if you live in Los Angeles or somewhere else where the climate is dry, everyone’s skin is dry. The symptoms can also come on slowly.”
However, symptoms can collectively or individually produce noticeable change in one’s health, which should be something that providers in general pay attention to in an effort to diagnose – and diagnose timely.
“Symptoms that represent a sudden change in a patient, especially for someone who has been under one’s care for a number of years and has that ‘baseline’ there, could be concerning,” Singer continued. “Or, if someone is complaining about a number of symptoms: her or she is more fatigued, sleeping more but isn’t feel ‘refreshed,’ or their cognition does not seem right. Any change in status.”

For women, as well as for men, the affects of underactive and overactive thyroid can likewise produce a clinical range that is, to a point, difficult to predict. “They’re two totally different disorders,” Singer said. “Older women are more likely to have their mental status affected in general, so we worry about them more. Those who may have a tendency towards dementia may also see this amplified by hypothyroidism, because it slows everything down. In older women, ages 70 and older generally, with hyperthyroidism, you worry about bone loss and cardiac arrhythmias, such as atrial fibrillation.

Trying to determine whether hyper compared to hypo is more dangerous continues to be a complex question, said Papaleontiou. “It is more common for women with hypothyroidism to have fertility problems. Post-menopausal women may be more susceptible to osteoporosis with untreated hyperthyroidism as compared to men.”

Several studies have attempted to elucidate associations between lifestyles and risk of developing thyroid disease, with results being inconclusive, said Papaleontiou. “However, we do know that several chemical compounds, such as perchlorate used in fertilizers that can also migrate into food and water, can disrupt thyroid function,” she continued. “We also know that exposure to radiation is an environmental risk factor for thyroid cancer. More recently, some studies have also suggested that obese individuals tend to present with more aggressive forms of papillary thyroid cancer and at a more advanced stage than their non-obese counterparts. However, more research is needed before definitive conclusions are made.”

Papaleontiou suggests underscoring the importance of eating a balanced diet and adapting a healthy lifestyle among patients, including behaviors such as eating nutritious foods, exercising regularly, managing stress, and sleeping well. To function correctly the thyroid depends on a good supply of iodine from one’s diet.
“Iodine deficiency is the main cause of thyroid disease worldwide,” Papaleontiou said.” Even though we think of iodine deficiency as rare in the U.S. due to the widespread use of iodized salt, Americans actually get the majority of their salt intake from processed foods that in general don’t contain iodine, and iodine intake may not be optimal in some parts of the country. On the flipside, chronic excessive consumption of iodine, such as frequent consumption of seaweed or kelp, can trigger or exacerbate hypothyroidism and hyperthyroidism.”

Despite the sense that the coronavirus (COVID-19) pandemic remains a lingering healthcare crisis, the truth of the matter is that it very well could only be in its infancy. Should the presence of the virus truly loiter in our society for a prolonged time, the ultimate depths of its impact will still have to be learned and understood. Much like the nature of thyroid disease itself, the relationship that COVID-19 may have with this chronic set of autoimmune disorders is a developing situation.
Even though experts believe that it’s too early to determine whether the rate of thyroid disorders will be affected by a prolonged incidence of a COVID-19, the American Thyroid Association has addressed important concerns raised by both providers and patients in regards to how the pandemic might impact patients who are already living with thyroid disease.1
According to – It is safe to delay biopsy of a thyroid nodule in the era of this pandemic, as most thyroid nodules are benign (not cancerous). Even if thyroid nodules are suspicious or cancerous, there is little risk in delaying surgery to have them removed in the majority of cases. Thyroid surgery is considered essential in cases where patients have compressive symptoms, such as difficulty swallowing or breathing due to the tumor size, there is evidence of invasion of other parts of the neck or the biopsy showed aggressive forms of thyroid cancers (anaplastic, medullary).

According to Maria Papaleontiou, MD, assistant professor with the University of Michigan, only the few thyroid cancer patients who are receiving chemotherapy treatment are considered at higher risk for severe illness due to COVID-19. “The vast majority of thyroid cancer patients are not considered to be immunocompromised due to having this diagnosis,” she said. “Patients who have hyperthyroidism and are taking the medication methimazole may develop the rare side effect agranulocytosis, where the immune cells fighting infection decrease. This may present with fever and/or sore throat, symptoms that may coincide with COVID-19 symptoms. If patients on methimazole develop such symptoms, the recommendation would be to stop the medication and call the treating physician.”

During the pandemic, delaying biopsy of thyroid nodules is considered safe because most nodules are benign, and little risk exists in delaying surgery to have nodules removed in the majority of cases, even if nodules are suspicious or cancerous, said Papaleontiou, also suggests that decisions on whether to delay radioactive iodine treatment for patients with papillary or follicular thyroid cancer at this time should be made on an individual basis. Urgency would exist in patients with distant metastases, especially if they are growing.
“Thyroid surgery is considered essential in cases where patients have compressive symptoms, such as difficulty swallowing or breathing due to the tumor size, there is evidence of invasion of other parts of the neck, or a biopsy showed aggressive forms of cancer,” Papaleontiou said.
According to the U.S. Center for Disease Control & Prevention, a diagnosis of Hashimoto disease or Graves’ disease does not equate to higher risk of contracting COVID-19 or that they are more severely affected if they contract the disease. To date, there is also said to be no indications that patients with autoimmune thyroid disease are at increased risk of severe complications specifically due to thyroid disease.

Also to be determined is whether or not the existence of the pandemic itself can cause thyroid disease in general.

“There’s plenty of anecdotal evidence that potent stressors, be it physical or emotional, can be associated with being the trigger for Graves’ disease, or any other autoimmune disorder,” said Peter Singer, MD, a physician in the Keck School of Medicine of the University of Southern California. “This affect would be among those who already have the underlying makeup to develop Graves’. According to Singer, it’s too early to determine if this can be an impact of the virus, but it’s certainly conceivable. “This pandemic is a potent stressor. But we may not know the answer until we look at it from an epidemiological perspective.” Singer said there have been a few epidemics of Graves’ disease, or so-called epidemics, such as during World War II and during the Bosnian War.