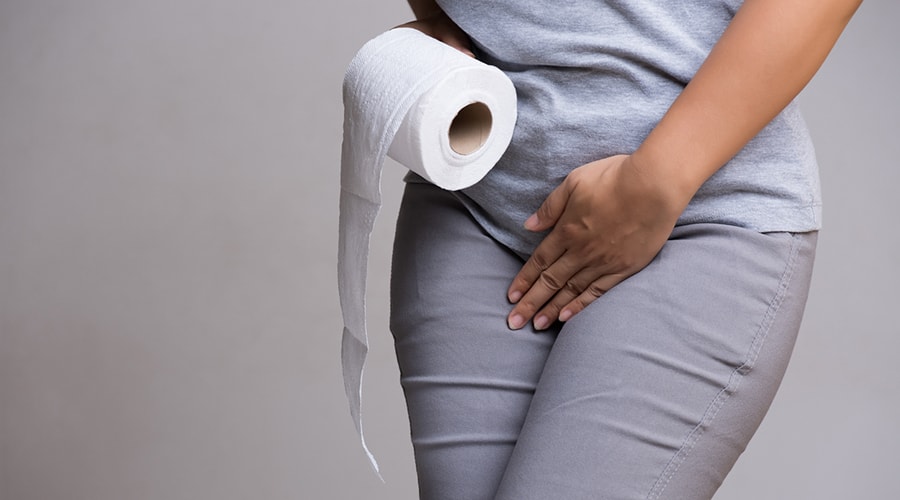 What is urinary incontinence? I am often surprised at the confusion surrounding the question “Are you incontinent?”. Many people have minor urinary accidents when laughing, will report that they are not incontinent. Others will answer “no” to this question, reporting that it only happens during sleep, so it is not considered incontinence.

Any leaking of urine that causes you to have a change in your life-style is a problem. Are you unable to jump without leaking? Do you feel embarrassed because you wear a pad? Do you feel that you can’t go on a long car ride due to having to use the bathroom more often than normal? These are signs that the issue should be addressed.

The urinary system is a complex part of the body that needs to work with the rest of the system to maintain continence. The bladder is a balloon shaped muscle that serves as a storage pouch for urine. The bladder is part of the urinary tract, along with the kidneys, ureters, and urethra. The role of the bladder is to store, fill and empty urine. It should be able to store urine for several hours, and allow us to empty when ready. In normal circumstances it fulfills these aspects without us thinking much about it.

Urine is formed when the kidneys filter blood and remove excess waste materials and fluid. Urine is steadily excreted from the kidneys, then passes down two ureters to the bladder. Approximately two quarts of urine is removed every 24 hours.The bladder holds 400-600 ml (2-3 cups) of urine. The detrusor muscle is a smooth muscle found in the wall of the bladder. As the bladder fills the detrusor muscle stays relaxed and allows filling. During this phase another muscle at the neck of the bladder, the trigone, stays resting. We get the first sensation to void when the bladder is half full. Stretch receptors in the bladder wall give signals on the need to urinate. During this time the external urinary sphincter in the pelvic floor muscles stay closed and contracted. At this point we are able to put off the need to urinate and the urge will subside. To postpone voiding, signals are sent from bladder to brain to inhibit detrusor muscle and smooth muscle of bladder is signaled to continue storage.

When the bladder is full it is time to urinate. At critical filling level stretch receptors in the bladder give a strong sensation to void. At this time the external urinary sphincter relaxes, and the internal sphincter and trigone relaxes. Detrusor muscles contracts to squeeze the bladder in order to urinate. The bladder empties at a steady rate until urination is completed.

Believe it or not, not all urinary incontinence is the same. There are many different types. This is important, because effective treatment depends on the type that you have. The International Continence Society has created a document that defines the standard terminology of pelvic floor dysfunction and bladder control problems. Prior to this communication with the medical team and patients was difficult and confusing. It basis types of urinary incontinence on symptoms, signs and urodynamic observations (a type of test done by in urology) and divides it into three groups: storage, voiding, and post micturation (or post voiding) symptoms.

Symptoms are a subjective indicator of dysfunction. They are those things that you report, such as the feeling you get when you need to go to the bathroom. While they do not have a definitive diagnosis, they are used in conjunction with signs to guide diagnosis and treatment.

Symptoms can indicate pathologies other than lower urinary tract dysfunction, such as urinary infection which needs further medical attention.

Another type of storage dysfuction is urgency. This is the sudden, compelling desire to pass urine which is difficult to defer. Often people report it as the need to urinate more frequently than previously. In other works, when you need to use the bathroom you need to go right now! One common type of urgency is an overactive bladder syndrome. Usually with this there is the need to urinate several times during sleeping hours. It is the feeling you get when you have a urinary tract infection (however, overactive bladder is defined as urgency in the absence of a urinary tract infection or other pathology).

Similar to urgency is urge incontinence. Urge incontinence is the loss of urine short after feeling the need to urinate. There is usually a sudden, strong urge to go to the bathroom. Often people can not make it in time, resulting in an accident. The accident can be a large or small amount. With this type of incontinence people need to frequently use the bathroom (much more so that prior to having this problem). This can also be accompanied by nocturia, which is when the urge to go to the bathroom interrupts sleep more often than normal (normal is defined as once per night or twice if you are over the age of 65). This is the most common type of incontinence.

Finally, nocturia enuresis is having urinary accidents during sleep (is also referred to as “bed wetting”). In children, nocturia enuresis is considered primary when there hasn’t been a prolonged period of being dry. It is secondary if there was a period of the child being dry. Generally there are three causes of this: excessive urine volume, poor sleep arousal, and bladder contractions.

Voiding begins when a signal is sent from the brain, and continues until the bladder is empty. It should be a consistent, steady stream and come to a complete stop when completed. During this phase there are some common incontinence issues that may occur.

One dyfunction during this phase is slow stream. A slow stream is generally something reported by the individual. Usually this is in comparison to previous performance or in comparison to others. It may take longer than in the past to complete urination.

Another dysfunction during the voiding phase is spraying. Spraying is when the stream of urine spits or sprays instead of voiding with one consistent stream.

A third issue during this phase is intermittency. This is marked by the stop and start flow of urine one of more times during an episode of voiding.

Hesitancy can also occur during this phase. This is difficulty initiating voiding after one is ready to urinate.

Once the bladder is empty, the individual should feel that they no longer need to void and all urination should cease.

There are other dysfunctions that are not defined by the International Continence Society, but are common.

Can include: poor eyesight, dementia, depression, mental confusion or anxiety

Identification of the type of urinary incontinence is important as it guides treatment decisions and is the first step towards overcoming these symptoms. Most, if not all, types respond best to a team approach for treatment in order to achieve the best outcome.