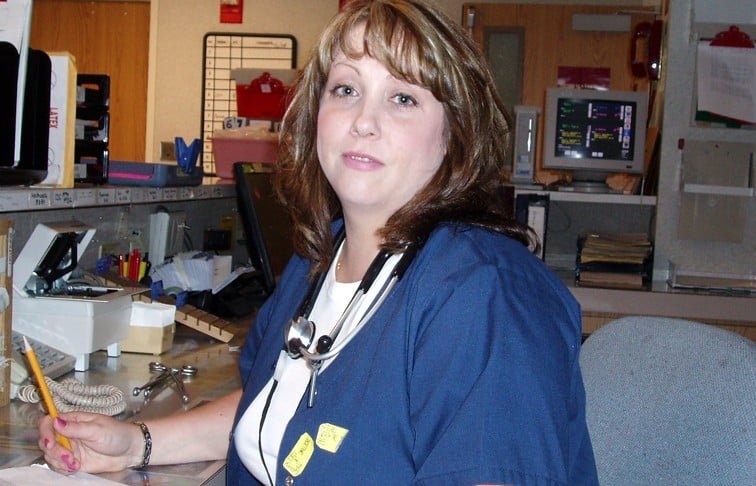 When your career is healing others, your world turns upside down when you’re the one who must be healed.

“Some say nurses are the worst patients,” says Eden Stotsky-Himelfarb, a workplace oncology nurse navigator for the Johns Hopkins Work Stride Managing Cancer at Work program in Baltimore, MD. “Sometimes when nurses get sick they keep their nurse’s hat on and want to know and micromanage every detail of their treatment.”

Often, healthcare professionals go into a healthy state of denial. “I’m not a cancer victim,” they tell themselves. “I’m a person managing cancer cells.”

“If they’re so much in denial that they’re not getting the support they need or taking good care of themselves while going through treatment, that could backfire,” Stotsky-Himelfarb says.

We talked with some healers who are continuing to serve others as they fight the health battle of their lives. Here are their stories.

“I tried so hard to avoid all the things that were bad for me,” Hanson says.

But, at 42, the researcher became the patient. She was diagnosed with breast cancer, underwent a left breast mastectomy, and endured six months of chemotherapy. Suddenly, she became vulnerable to the same out-of-control cancer cells as the people she was doing research to help.

“It made me realize much more that these illnesses are random, and that any of us could experience them at any time,” she says.

Hanson, like so many others in the healthcare field, refused to view herself as a cancer victim or, even, sufferer.

“I never thought of myself as a patient; that was part of my coping strategy,” she says. “I just have cells growing erratically in my body. I’m going to get them removed, and everything will be fine.”

That was her story, and she stuck to it.

Hanson returned to work one week after her mastectomy – with a drain taped to her body — and biked to work after her weekly chemo infusions. She avoided conversations about her illness, so that colleagues wouldn’t feel upset; donned a pink wig to jolly up her hair loss; and rode a mule down the Grand Canyon instead of flaking out on a long-planned vacation with her sisters.

“I didn’t like being in the role of patient and avoided thinking of myself that way,” she says. “I didn’t identify with being a cancer patient. Instead, I’m someone experiencing cancer.”

That self-talk helped Hanson manage her disease and career – mostly. Occasionally, her cancer overwhelmed her coping mechanism. When she asked her supportive supervisor to quit being a work gatekeeper, too, tons of projects landed on Hanson’s research desk. Big mistake, she thought.

“It was a lot for me to handle – my family and a huge workload,” she says. “That’s when I appreciated what my supervisor had been doing for me.”

Anna Valdez was a first-year nursing student in northern California when she was assigned to a clinical shift in a usually sleepy emergency room.

Suddenly, the ER was jolted awake by a gunshot victim with half his head blow off.

“It felt really amazing that I was part of a team working to try to save his life,” Valdez says. “It was the first place in my life that I felt I belonged. These were my people.”

Valdez was an emergency nurse for 9 years, working 12-hour shifts, walking 10 miles a day. Then, in her early 30s, she began feeling joint pain and fatigue.

“I thought maybe I just needed to lose weight or stretch,” she says. “But things kept getting worse. I woke up every day feeling like I had the flu. My fingers started turning blue. And I was feeling so much pain that I lay on the floor in the ER with a hot pad.”

After years of denial then testing, Valdez finally was diagnosed with lupus, a chronic autoimmune disease that can damage joints, skin, or organs. What Valdez wouldn’t let lupus damage was her career and ambition.

“I thought I could make it work, thought I was going to get better,” she says. “But it didn’t get better.”

Often, the condition got worse. Valdez suffered pneumonia twice in one year, forcing her into bed. And when she did get to work, she felt exhausted and completely spent after 8 hours of a 12-hour shift.

“If you were my patient in hour 11, I wasn’t checking on you as much because it hurt to walk to your gurney,” she says.

Ultimately, Valdez left hands-on emergency medicine, which had once been such a joy and good fit, and worked for San Joaquin County overseeing emergency care for the area. From there, she became vice president of medical service for an air ambulance service. Ultimately, Valdez earned a doctorate and signed on with Santa Rosa Junior College, where she received her nursing training.

Reviewing her journey, Valdez says lupus has been a curse and blessing.

“I’ve always been an overachiever,” she says, “I’d work 16-hour shifts. I didn’t spend as much time with my family. Lupus made me sit down and decide how I was going to spend my energy, prioritize what’s important in my life. I used to let things bother me and get stressed out. Stress is hard on lupus. I’ve learned not to let a lot bother me.”

Article by Lisa Kaplan Gordon. Lisa is an award-winning writer who’s covered stories for Yahoo, AOL, and many others. She lives in McLean, Virginia.