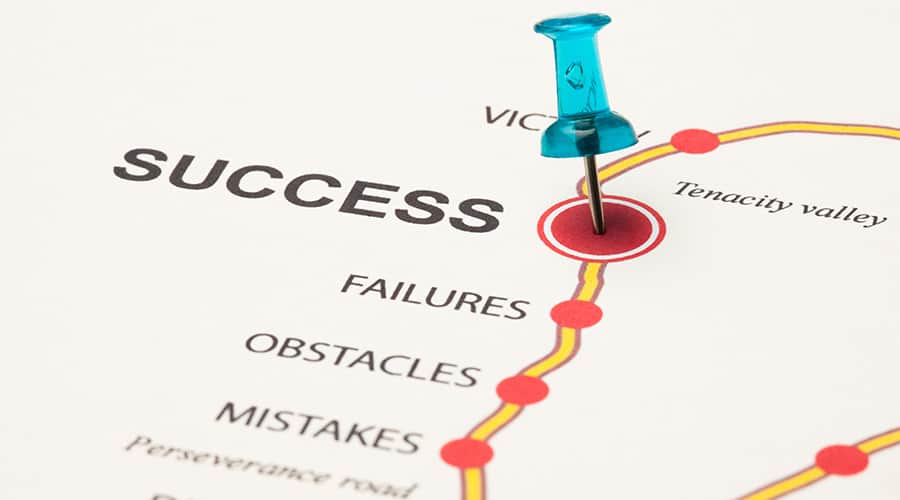 Grit: Effort combined with passion is the secret ingredient to success

When I was in grade school, I played on a basketball team for the first time. Unfortunately, our team was not great. I recall feeling “I’m not a good basketball player.” I didn’t realize yet that my greatest strength wasn’t raw talent or even refined skill, but a deep driving need to push forward: GRIT.

The seasons came and went, with many moments of failure. While quitting something was never an option, I didn’t fully understand the ins and outs of organized sports and the various forces at play that can make one team a champion and another at the bottom of the standings.

Later in my life, I was blessed to be a part of a team in high school that had a knack for winning and exposed me to dedicated coaches. While there were many moments of success and times when goals were not met, I recall feeling differently. In retrospect, I wondered why. I was the same person with the same talents. My skills had improved, but I was by no means the best player in the league (or even on my team). So why did I no longer identify myself as a “bad” player?

Because our team had many talented players, there were often college scouts at our games. Early in my high school career, I overheard a conversation between my coach and one of the scouts regarding my play. My coach said, “She isn’t yet the fastest or a top scorer, but she has the most hustle and doesn’t quit. She’s one to watch for the future.”

While I often wished I was the fastest athlete or the most prolific shooter on the court, this sentence has often played in my head throughout my career in sports and other pursuits. I no longer identified myself as either good or bad at things. I was freed from the line of thought that I either succeeded or failed at something and that I was either “good” or “bad”. I started to see myself as someone who hustled and didn’t quit.

The coach didn’t realize it, but at that very moment on that particular day, he gave me a gift that has served me throughout my life (in sports and many other endeavors). That gift was what many experts now see as the key to success. It has been front and center in many studies and has been shown as a predictor who will be a high achiever. That key is termed “grit.”

Wikipedia reports that grit is a positive, non-cognitive trait based on an individual’s perseverance of effort combined with the passion for a particular long-term goal or end state (a powerful motivation to achieve an objective). This perseverance of effort promotes the overcoming of obstacles or challenges that lie on the path to accomplishment and serves as a driving force in achievement realization. Distinct but commonly associated concepts within the field of psychology include “perseverance”, “hardiness“, “resilience“, “ambition”, “need for achievement” and “conscientiousness.” These constructs can be conceptualized as individual differences related to the accomplishment of work rather than talent or ability.

Psychologist Angela Duckworth and colleagues defined grit as “perseverance and passion for long-term goals.” They found that individuals high in grit were able to maintain their determination and motivation over long periods despite experiences with failure and adversity. Gritty students tend to outperform their less gritty peers, and grit scores are associated with higher GPAs. Grit was a more accurate predictor of whether an incoming cadet would finish his or her first summer of basic training at West Point; more so, in fact, than self-control, academic GPA, Military Performance Score, and West Point’s own Whole Candidate Score, (Duckworth et al., 2007). Grit also predicted those students who would advance into the later rounds of the Scripps National Spelling Bee (Duckworth et al., 2007). Also, grit is a better predictor of success than intellectual talent (IQ), based on their evaluation of educational attainment by adults and GPA among Ivy League undergraduates.

More recently, grit has been shown to predict the success of women lawyers in the country’s largest law firms. This is a big finding in the legal profession because for years, men and women have been entering law schools and law firms as first-year associates in roughly equal numbers, yet the number of women making it to the highest levels of partnership has remained static and low. As of 2013, the number of female equity partners was about 17 percent. The percentages of women equity partners and women associates in the typical law firm have actually declined slightly in the past two years. Encouraged by research, the American Bar Association Commission on Women in the Profession created the Grit Project to educate women lawyers about the science behind grit.

While we are starting to see that grit is a significant predictor of success, there is little research on how to increase it. However, Duckworth has given guidance on how to encourage and develop grit based on common factors currently known in psychology.

Pursue what interests you

According to Duckworth, “The first period is interest development — where you fall in love with something. You find that you’re thinking about it more and more.” She states that it is hard to stick with something you don’t really care about. Duckworth states that introspection is not the right path, and warns against just sitting and thinking about what may interest you. In other words, you need to get out there and try things so you really know what’s perfect for you. Once you find something that you are excited about, she recommends picking a teacher or mentor to help you along.

UPenn colleague and professor Adam Grant said a mentor is key to turning passion into skill. He states “Often interest precedes the development of talent. It’s having a coach or teacher who really makes something exciting to be involved in that leads you to put in the practice necessary to become an expert at it.”

Keep in mind that hard work develops skill, and we are much more likely to stick to things where we excel. Duckworth reports, “You develop a capacity for doing hard practice — the kind scientists call “deliberate practice.” Over years of working in a very diligent way on your weaknesses, you improve.”

Working on weaknesses is key. In fact, former Navy SEAL James Waters, he said this is exactly what makes SEALs so tough. He states “When you go out on a mission, you always acknowledge your successes but much more important than that is you take a hard look at your failures and are willing to accept criticism. One of the key strengths of the SEAL Teams is the culture of constant self-improvement. No one ever says, “That’s good enough.” On almost every real-world mission I was on — even the most successful ones — we spent 90 percent of our post-mission debrief focusing on what we did wrong or could have done better.”

A big difference between someone who is just a hard worker and somebody who has real grit is that the latter finds meaning in what they do. As per Duckworth, “Having a sense of the greater meaning of your work, and how it’s important to other people, not just interesting to you.”

After studying 16,000 people, Duckworth found that “grittier people are dramatically more motivated than others to seek a meaningful, other-centered life.” She also reports “Gritty people don’t merely have a “job.” They have a calling in life. She explains it with this story from Grit: The Power of Passion and Perseverance:

And helping others through your work doesn’t just make you gritty — it also makes you love what you do. People who perform work that benefits society show high levels of job satisfaction. And that leads to an upward spiral of grit.”

This type of hope isn’t just wishing things will go well. Duckworth says you need an active type of hope. You must believe things will improve because you’re going to improve them.

From her book Grit: The Power of Passion and Perseverance:

“One kind of hope is the expectation that tomorrow will be better than today. It’s the kind of hope that has us yearning for sunnier weather, or a smoother path ahead. It comes without the burden of responsibility. The onus is on the universe to make things better. Grit depends on a different kind of hope. It rests on the expectation that our own efforts can improve our future. “I have a feeling tomorrow will be better” is different from “I resolve to make tomorrow better.” The hope that gritty people have has nothing to do with luck and everything to do with getting up again.”

In order to increase hope and develop grit, she recommends having a “growth mindset” and “optimistic self-talk”. These lead to perseverance over adversity. A growth mindset is the attitude that your abilities aren’t fixed. In other words, don’t focus on innate talent. Instead, believe you can get smarter and better at anything if you work hard. Optimistic self-talk is as simple as telling yourself “I can do it” when things get tough.

Hang Out With Gritty People

We are all influenced by the people with which we spend the most time. Jim Rohn, a motivational speaker, and self-help guru states “You are the average of the five people you spend the most time with.” If we chose people in our personal and professional lives that display a high level of grit, we are more likely to develop and practice this in our daily lives.

Duckworth states “Dan Chambliss said to me, “If you want to become a great swimmer, you should join a great team.” I really didn’t understand what he meant, but he unpacked that a little bit. He’s said, “Look, I’m not a particularly industrious guy, but I’m hanging out with all these hardworking faculty, reading papers, writing papers, and I just fall in line with the rest of them because that’s what people do, we conform.” He said, “If you want to be gritty, hang out with gritty people.”

In her research, she has found one fantastic side effect of becoming “more grittier.” She surveyed 2,000 people and reported that the results were clear: “I found that the grittier a person is, the more likely they’ll enjoy a healthy emotional life.”  She also states “And it’s not some lazy, starry-eyed contentment. Gritty people strive every day and enjoy new challenges. That’s the exciting kind of happiness.”  Therefore, the same quality that can make you successful in your career will also make you happier at home.

Woody Allen famously declared that “Eighty percent of success is showing up”. Grit is what allows you to show up again and again.