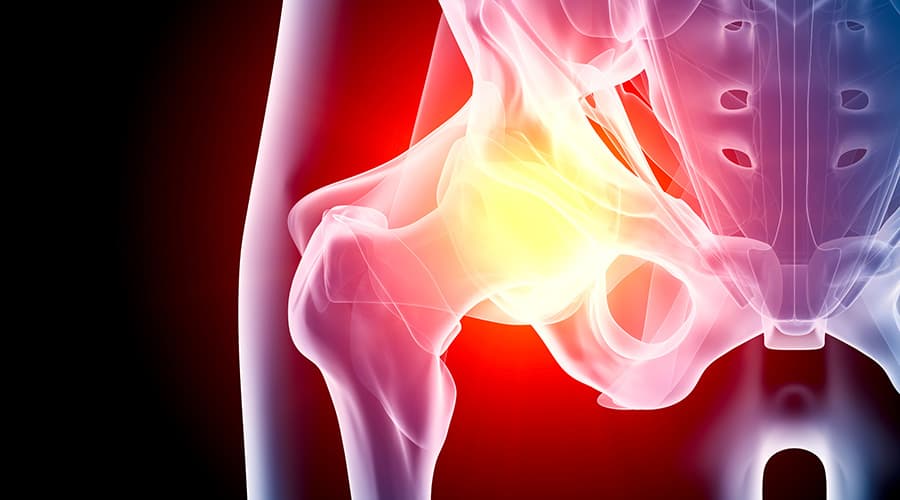 Erin Johnson had been dealing with chronic pelvic pain since she was 16 years old. Over the years, she underwent many CT scans and X-rays, and received many different diagnoses.

“It was a powerful ache in my lower abdominal and back area that would get worse throughout the day,” says Erin.

The mysterious pain worsened in her twenties after she had children, ultimately resulting in the removal of her gall bladder. Still, the pain persisted.

“I loved going on runs, but the pain would get worse when I’d start running,” Erin adds.

At one point her gynecologist suggested that Pelvic Congestion Syndrome (PCS) may be the culprit. After some research, Erin found the similarities between the symptoms of PCS and her own were uncanny. She was advised to consult with an interventional radiologist. A CT scan was completed that noted that some of the veins in her abdomen were bigger than they should be, which is a red flag for Pelvic Congestion Syndrome.

Chronic pelvic pain is defined as “non-cyclic” pain lasting greater than six months. It is generally a frustrating diagnosis and leaves patient searching for answers for years.

In the past, a diagnosis of chronic pelvic pain left many patients frustrated with few treatment options and a lack of available resources. Their physicians were likewise perplexed, despite the endless acquisition of negative laboratory and imaging data as well as inconclusive consultations obtained. In the last 10 years, improved scientiﬁc understanding and increased physician awareness have lessened the confusion surrounding this condition.

While there has been an increase in understanding of and treatment of pelvic pain issues, many aspects of it remain underappreciated. One such diagnosis, Pelvic congestion syndrome, appears to continue to be an underdiagnosed and undertreated disease.

Men and women can develop pelvic congestion syndrome. Typical age of onset is between 20 and 45 years old. Often patients will complain of a severe dull ache or pain in the abdomen, pelvis, groin, and/or genitalia. This may be a result of pelvic varicosities, which present similar to varicose veins of the legs. Because of vein wall weakness and inability of the it to return blood effectively, pressure in the vein increases as blood pools or remains in the pelvic vein. This may cause pressure pain and throbbing that can contribute to nerve irritation in the pelvic region. Risk factors may include obesity, pregnancy, sedentary lifestyle, constipation, prostatitis, surgeries, ovarian varicosities, and endogenous estrogen levels.

Patients with pelvic congestion syndrome generally report that the dull pain is chronic but that it worsens in certain situations, including:

Besides the pain, patients may experience other PCS symptoms as well as different combinations of these symptoms. The severity can also vary quite widely between individuals. These symptoms can include:

The diagnosis of this is generally one of exclusion. The ﬁrst step in the treatment of PCS related to chronic pelvic pain requires a multidisciplinary approach because the differential diagnosis is quite long and varied. For women evaluation by an obstetrics/gynecology specialist is a fundamental part of the assessment, but input from other specialties including anesthesiology, gastroenterology, general surgery, neurology, hematology/oncology, psychiatry, and urology may also be necessary. The standard workup usually includes an abdominal and pelvic examination, Pap smear test, routine laboratory blood work, and some cross-sectional imaging.

After a physical examination, a Pap test to rule out cervical cancer, and routine laboratory bloodwork, a cross-sectional imaging study is obtained to be certain that there is not a pelvic tumor. If the clinical symptoms are those of chronic pelvic pain, worse when sitting or standing, and sometimes also associated with varicose veins in the thigh, buttock regions, or vaginal area, the possibility of ovarian vein and pelvic varices must be considered.

Once tests have been performed to exclude other causes of chronic pelvic pain, definite tests that can be done to establish a diagnosis of pelvic congestion syndrome include:

After diagnosis treatment options vary. Some options include:

So how did things work out for Erin? She elected to undergo ovarian vein embolization. The minimally invasive procedure closes off faulty veins so they can no longer enlarge with blood and cause pain. Typically, patients are in the hospital for no more than two or three hours and can resume normal activity almost immediately.

“The very next day I went for a run and had no pain at all,” Erin shares. “I’ve lived through decades of strict medication and diet regimens. I’ve had countless vacations and family events ruined by pain. And now that pain is gone.”