In a clinician’s office it’s not uncommon for patients to ask a doctor about the effects of certain dietary choices on their wellbeing. When it comes to medical concerns such as weight management, heart health, bone strength and the immune system, food and drink choices are often a realistic and tangible place to start if a patient is looking to make a change. However, this same correlation is not always regarded when it comes to respiratory wellness.

“While a direct connection between food and breathing may not seem obvious, the two are part of the same metabolic process” said Deep Ramachandran, MBBS, MD, Pulmonary, Critical Care and Sleep Medicine physician at Genesys Regional Medical Center in Grand Blanc, Mich. According to Ramachandran there has been a recent surge in interest in this more holistic approach to respiratory heath within the medical community, as people are seeking treatment that is neither medical nor pharmacological.

“Anything that relieves symptoms of respiratory disease, especially without side effects, make[s] it easier for patients to perform the activities of daily life” said Barbara Schuster, MSEd, RRT, director of the Clinical Education Respiratory Care program at Gwynedd Mercy University in Gwynedd Valley, Pa.

Protein
Those with respiratory illnesses encounter a set of complications in their everyday routines that those who breathe normally do not face. An individual who suffers from COPD can burn up to 10 times as many calories just breathing compared to a normal person.1 This means that the body must draw from extra resources for energy; also, a patient in this position may be underweight and have difficulty maintaining a healthy weight. Ramachandran explained that such an individual may require calorie supplementation or an increased protein intake to gain more muscle. 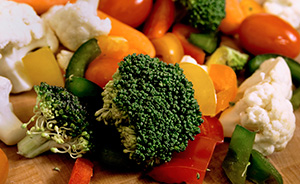 Protein is especially important to somebody with a respiratory illness because it is responsible for muscle strength, and the respiratory muscles are often weakened by diseases such as COPD.1 “The diaphragm, the main muscle used in breathing, is one of the hardest working muscles in the human body,” said Ramachandran. The diaphragm may be under added stress from a lung disease, which makes it imperative for those with breathing difficulties to consume at least two full servings of protein a day in order to keep up the strength of the respiratory muscles.1 Good protein can come in the form of dairy, dried beans and peas, fish and poultry.

Antioxidants and Omega-3 Fatty Acids
Another problem those with compromised lung health face is inflammation. A June 2013 study from the Journal of the American Medical Association found that individuals with COPD who also had chronic inflammation were more likely to have flare-ups, which deteriorate the lungs and the quality of life of patients who have COPD.2 Inflammation is often the culprit of obstructed breathing, and there are food sources that specifically combat it. August McLaughlin, CN, CPT, health writer and nutritional therapist, pointed to antioxidant-rich foods and omega-3 fatty acids, found in certain fruits and vegetables, nuts and fatty fish, as excellent dietary choices that help the body naturally fight inflammation. She added that trans-fats – often found in fried foods and hydrogenated vegetable oil – should be avoided, as well as highly processed, low-nutrient foods such as white bread, pretzels and candy.

Vitamins
Another area of nutrition to consider for respiratory disease patients is vitamin intake. Ramachandran acknowledged that “there has been increasing interest and research into dietary supplements which may benefit lung health, in particular vitamin C, vitamin D, and N-acetylcysteine (or NAC).” He added that NAC in particular has been shown to help reduce some symptoms of respiratory disease. And while there is no direct link between these vitamins and improved lung health, or reducing the risk of certain lung diseases, evidence shows they have an anti-inflammatory effect on the body.3 A patient could consider taking a vitamin supplement – Schuster recommended a multivitamin with extra vitamin C, which also strengthens the immune system – or adding such foods as brussels sprouts, kale, strawberries, bell peppers, spinach and dairy products fortified with vitamin D to his diet.

Liquids
If a patient does experience any bronchial inflammation – a characteristic of asthma, emphysema and chronic bronchitis, among other diseases – it can result in an over-production of mucus, and Schuster advised drinking plenty of water (six to eight full glasses a day) in order to thin out these secretions and promote mucus expectation. In addition, healthy liquids such as unsweetened teas, count towards fluid goals.1 Schuster specifically recommended drinking black tea, which has properties that aid in dilating the bronchial airways.

Eating Habits
For individuals who suffer from a respiratory disease, food considerations are not only about what you eat, but how you eat. Because the stomach is underneath the lungs and diaphragm, filling up on large meals can lead to uncomfortable bloating and restricted breathing functions.

“For people with chronic lung disease,” Schuster said, “I would recommend eating smaller meals or having several healthy snacks to avoid being too filled up and compromising diaphragm excursion, leading to difficulty breathing.” The American Lung Association advises eating four to six small meals, resting before each one, and avoiding the traditional two or three large meals a day. Large meals can cause the stomach to press into the space under the diaphragm and restrict the motion of full breaths.

Ramachandran also pointed out that certain foods, such as broccoli, cauliflower, beans and carbonated beverages, can cause excess gassiness and bloating. If a patient experiences added discomfort when eating these foods, it may be beneficial to consider removing them from his diet.

An important thing to keep in mind is that every patient with a respiratory illness is different, and that “dietary recommendations for any one person will depend upon that person’s condition and their nutritional status,” said Ramanchandran. Certain nutritional guidelines that work to ease the symptoms of one patient may be less effective, or unnecessary, for another. However, the marked improvement that many therapists have seen in their patients from dietary modifications, not to mention increasing research on the subject, would indicate that such behavioral changes may be a key to lessening the symptoms of those with chronic lung diseases.

“While medical care is often crucial,” said McLaughlin, “a healthy diet can help prevent and manage such conditions without the risk for side effects and complications.” And by lessening negative outcomes, the quality of life is improved for those who battle lung diseases every day. For many therapists and doctors who specialize in respiratory care, it’s increasingly becoming a valuable consideration for treatment.

Lauren Greaves is on staff at ADVANCE. Contact: lgreaves@advanceweb.com.

Lauren Greaves is on staff at ADVANCE. Contact: lgreaves@advanceweb.com.